From Barentsburg to Longyearbyen 3/3

As we returned from Colesbutka to our cabin, we received some bad news. The weather was changing and the forecast predicted some upcoming extreme fog that would stay for the next days. We had only a few hours of good weather left and since getting stuck in fog while crossing the mountains in polar bear territory (white fog + approaching white polar bear… :/ ) was no option. We needed to leave our cabin and head for Longyearbyen the same day. The distance of 25km to Longyearbyen was not a big issue; but the mountains and rivers we would have to cross and that we had only a vague plan for the last part of our route (that was also dependent on this year’s weather and terrain conditions), were. This would not be a Kindergeburtstag.

Between Colesbutka and Longyearbyen were several abandoned Soviet test-drill rigs on the mountain. The teams that had set up these test rigs back in the 60s had reached these spots with heavy off-road vehicles from Colesbutka. The tire marks they had left in the soft ground are still partially preserved and even visible on satellite pictures today.

After packing up our stuff and a short lunch break we geared up and set off towards Longyearbyen at around midnight. We headed straight up the steep mountainside next to the cabin and aimed for the track the Soviet vehicles had left behind in hope that this track would make our hike easier and guide us directly to the test rig sites. 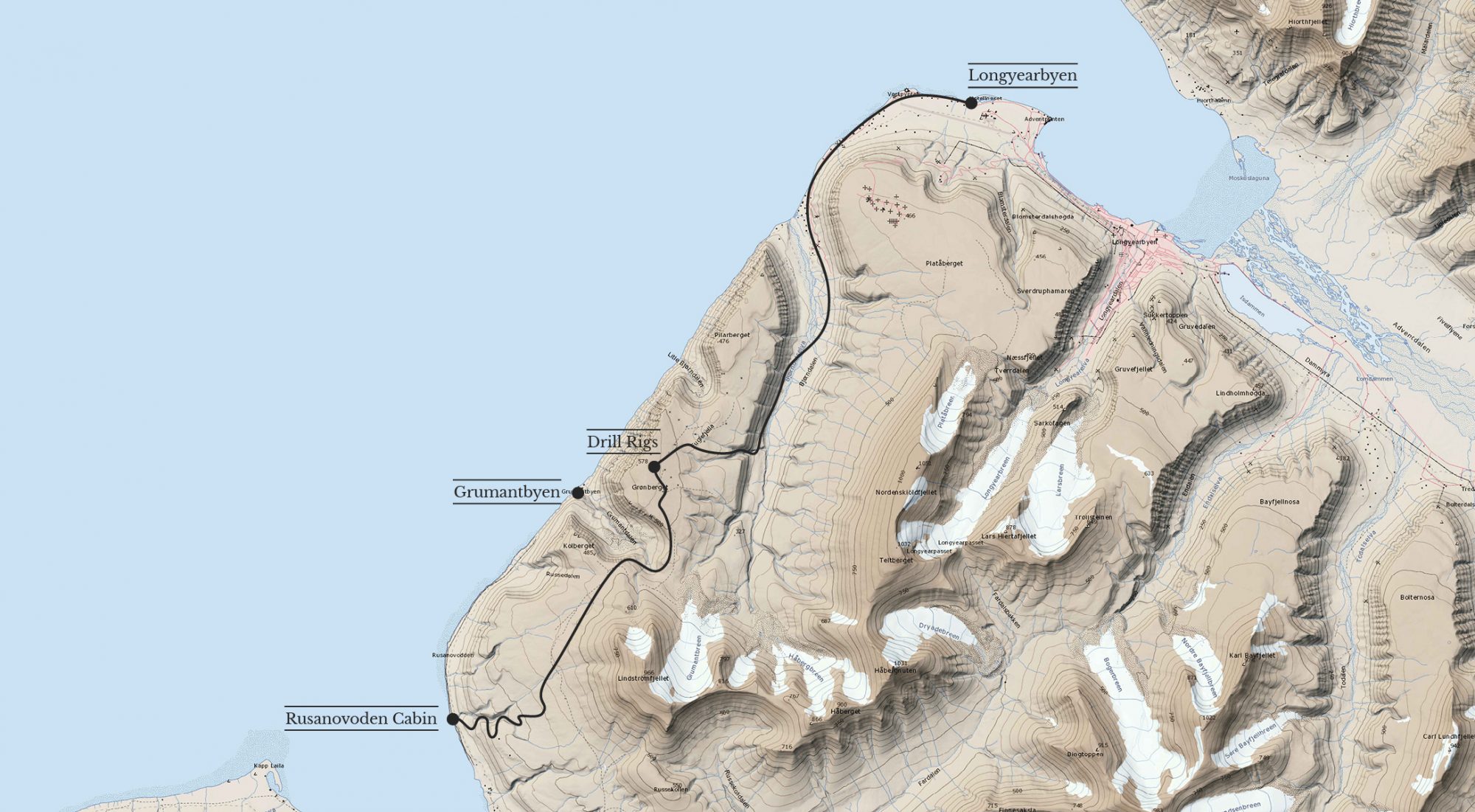 The mountainside next to our cabin was steep as fuck and what looked like a solid rock ground from far turned out to be an unstable steep gravel field. With the 35kg on our backs and an 8kg rifle in our hands every step lead to the ground giving way and we had to be extremely careful not to lose our hold or to cause land/rock slides. Walking on this surface was no fun. Despite that, we quickly gained height and after an hour or so the ground began to level out. The ground developed into wet and soft mud and tundra ground streaked with small streams, covered in moose. It took us about 2 hours to find and reach the old soviet track. But instead of being a solid walk friendly track, it turned out to be a soft mud stream in which you would sink in deeply. We got stuck several times and walking on this surface became more and more exhausting and frustrating. Our walking speed dropped rapidly and despite the beauty of the almost surreal landscape, our mood dropped as well. As we continued to gain height, the temperatures dropped and after a couple of kilometres, the track began to disappear under a increasing layer of snow. Our situation changed from sinking in mud up to our ankles to sinking in snow up to our knees…

About six hours after we had left the cabin, the first remains of the test drill sites finally came into sight. 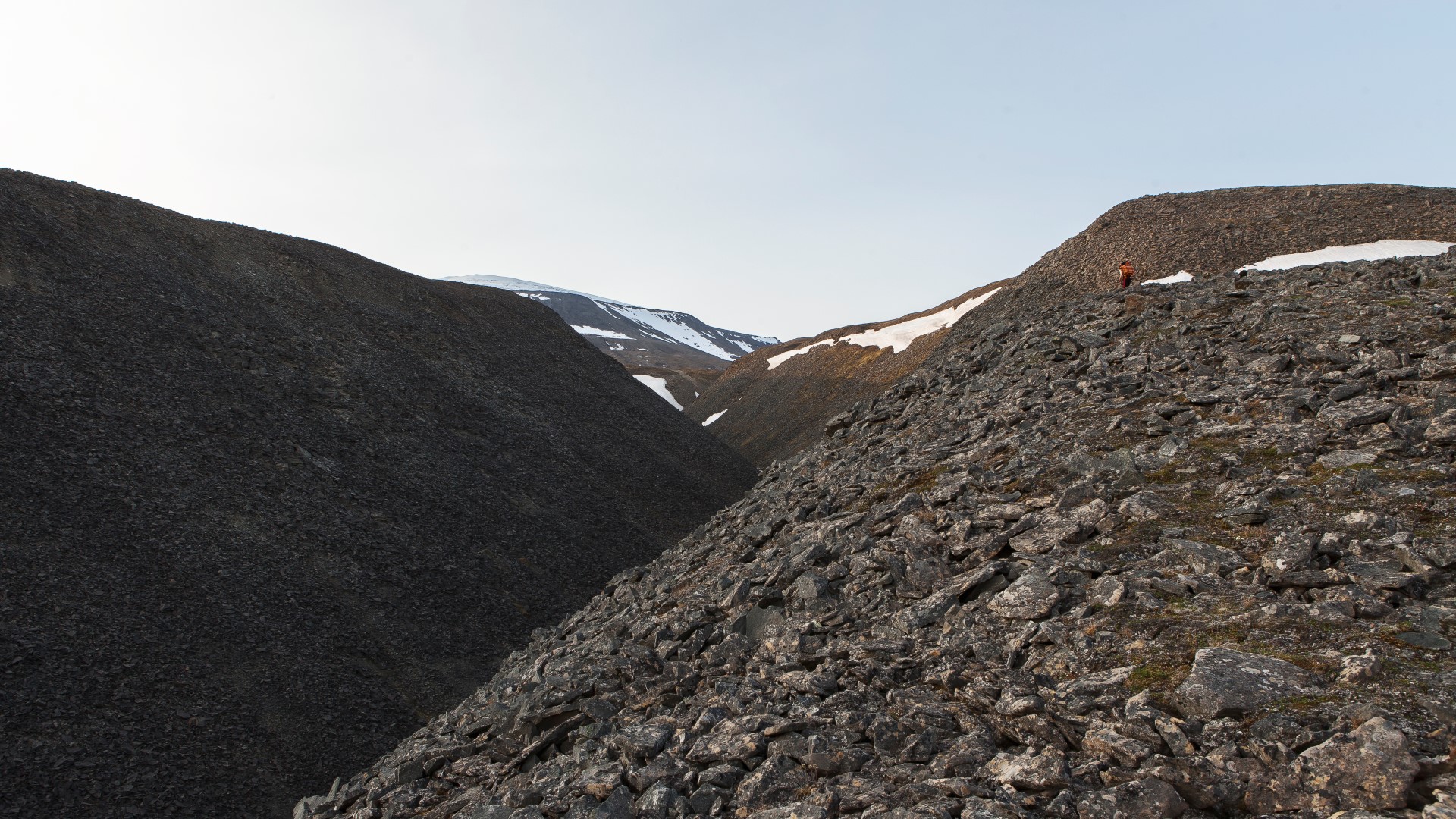 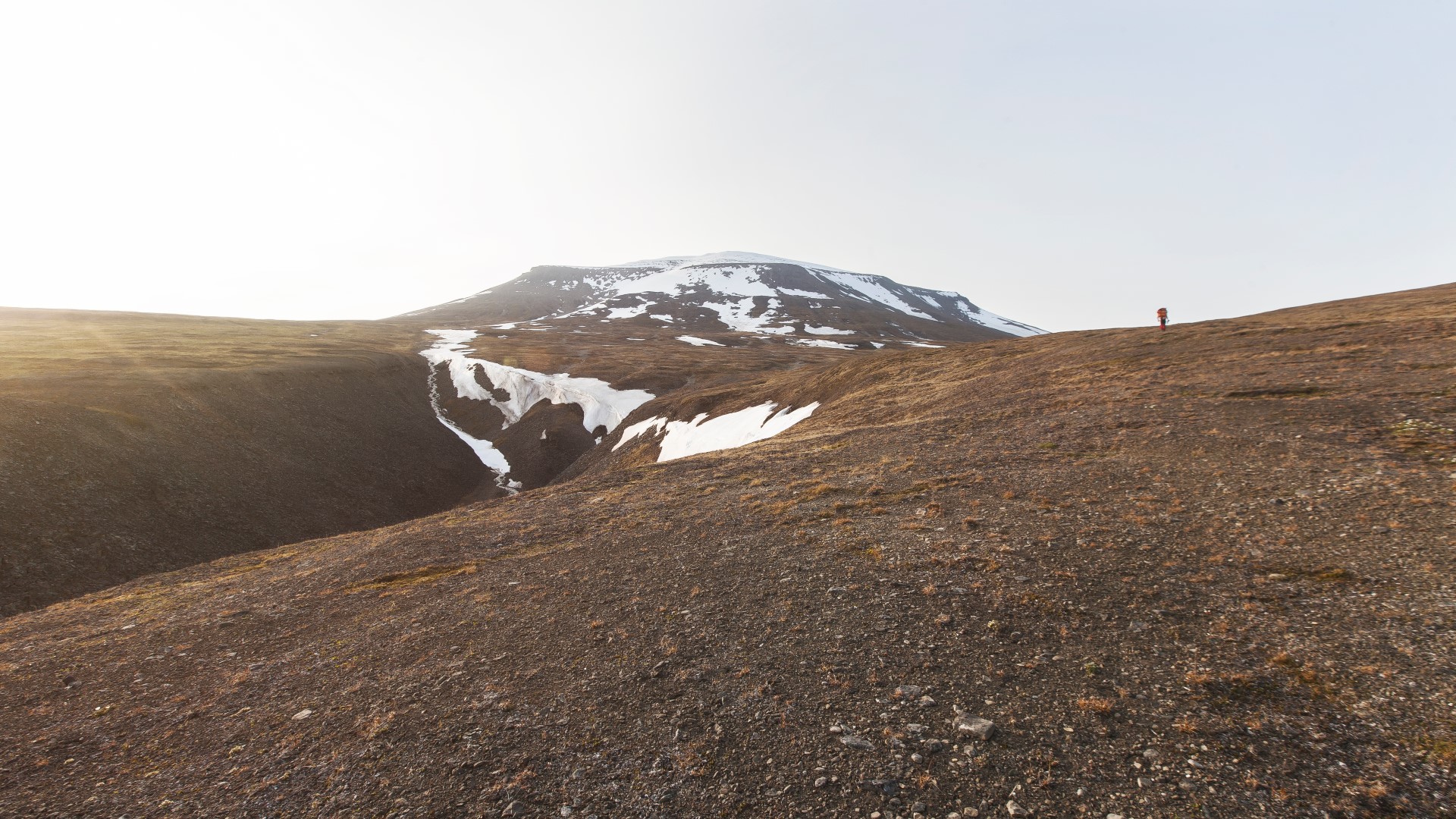 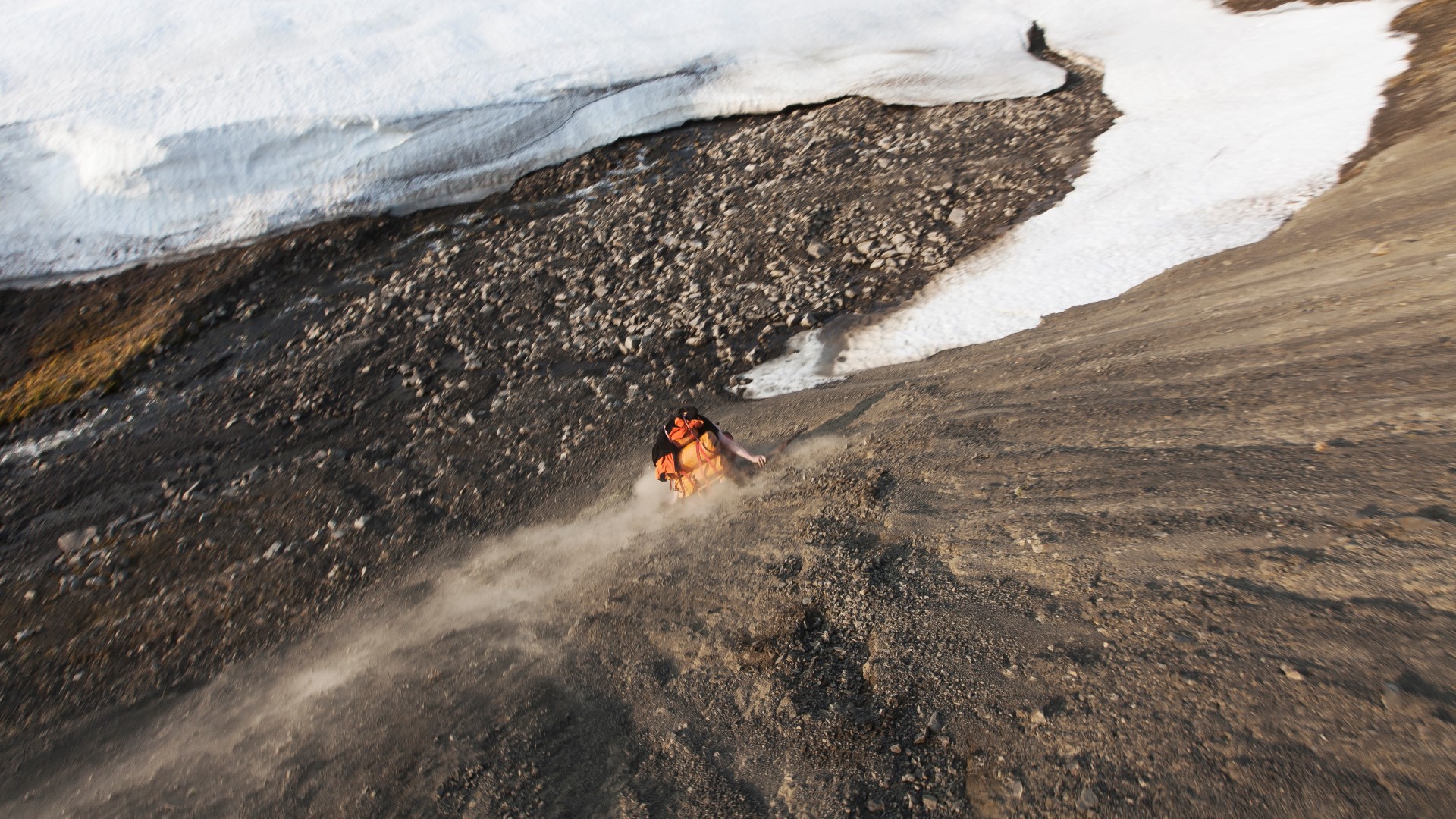 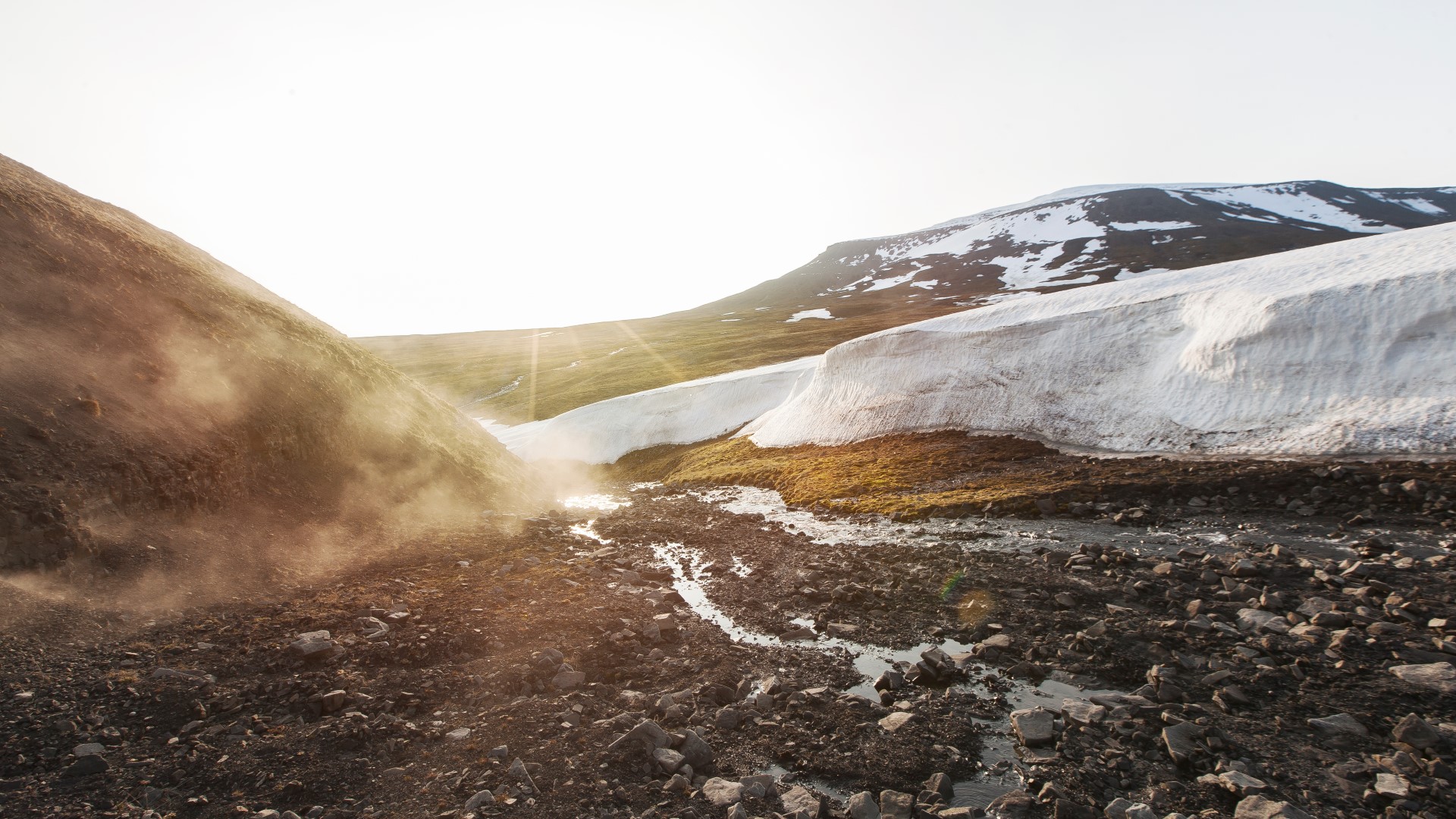 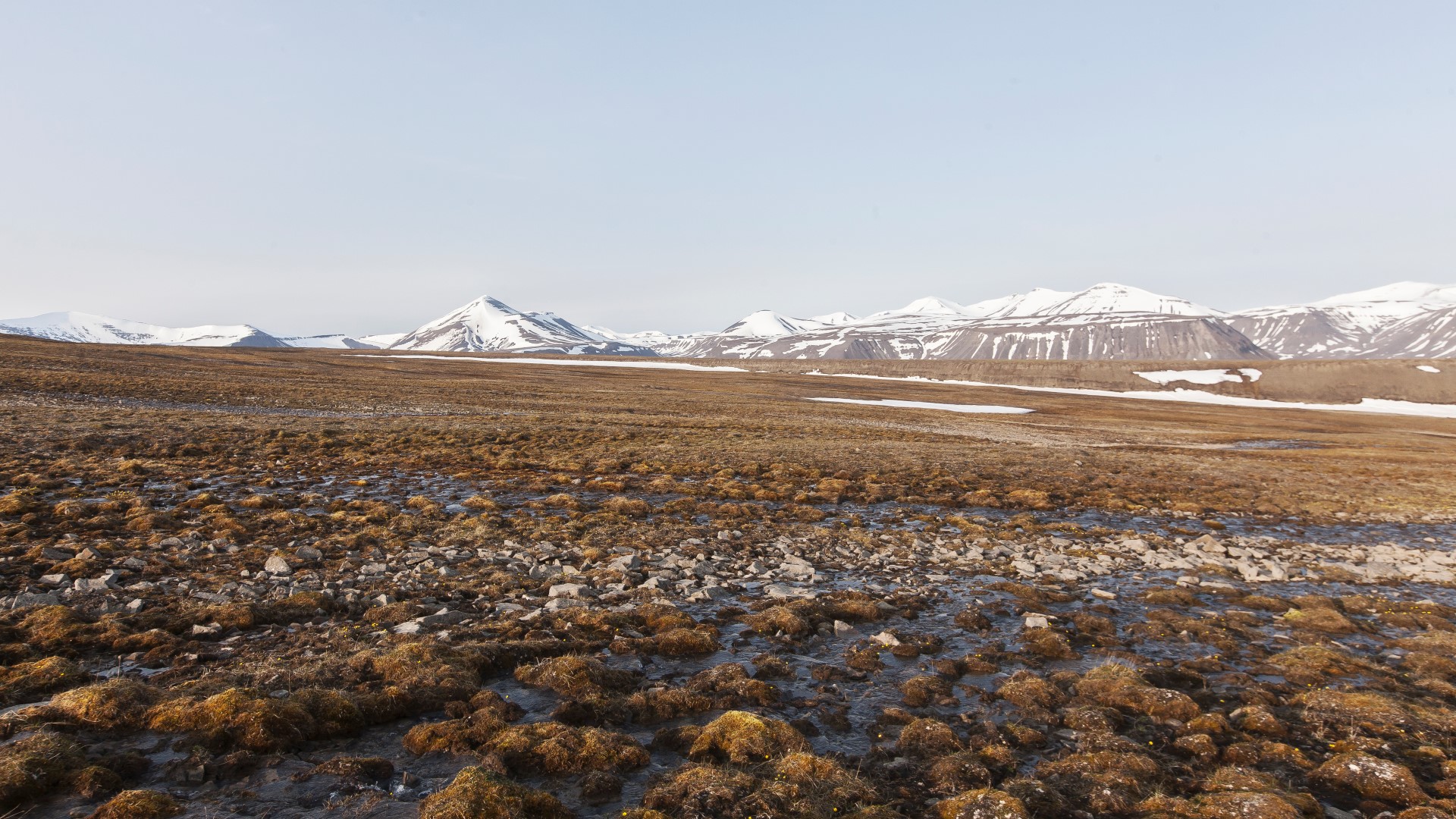 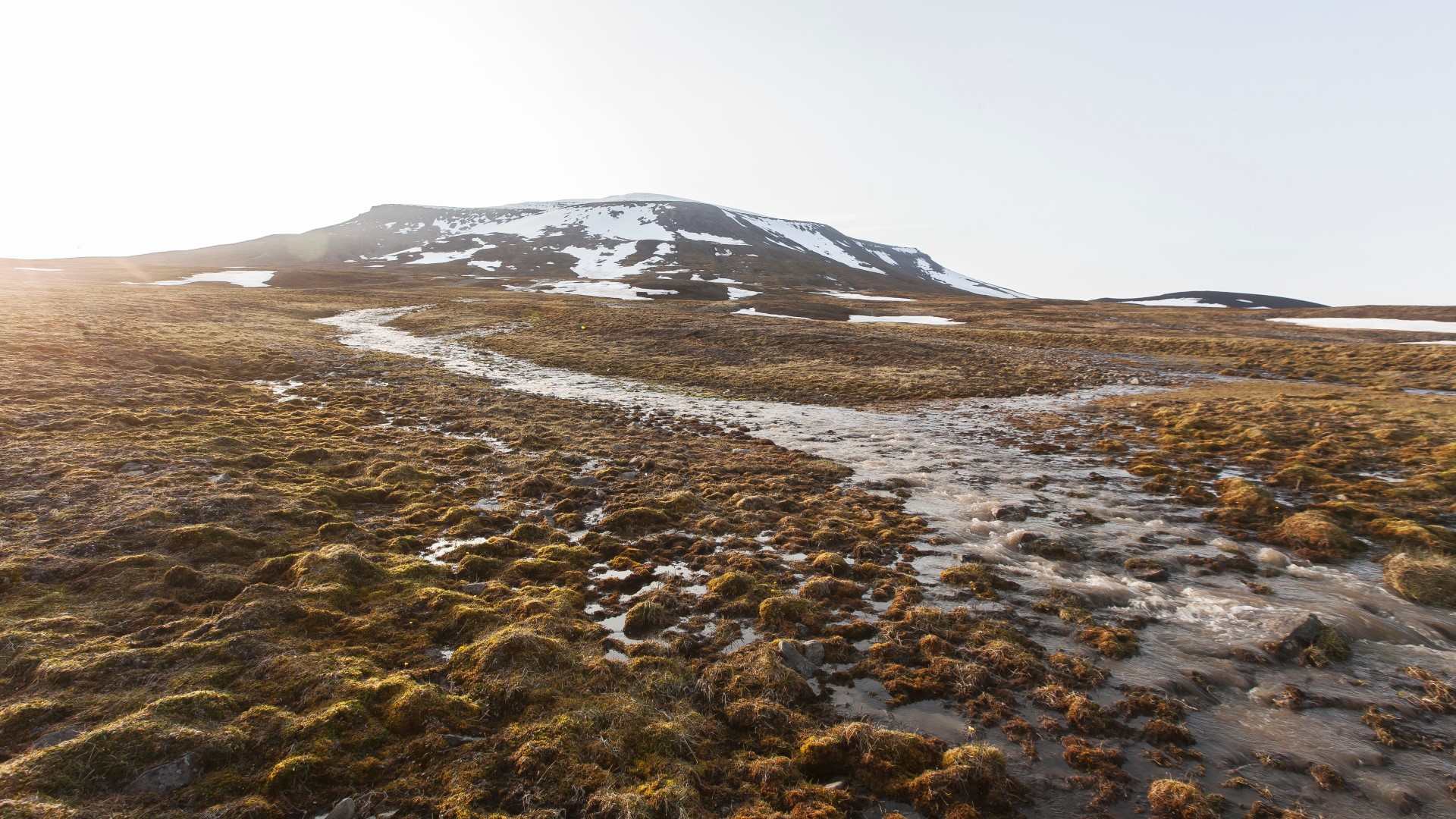 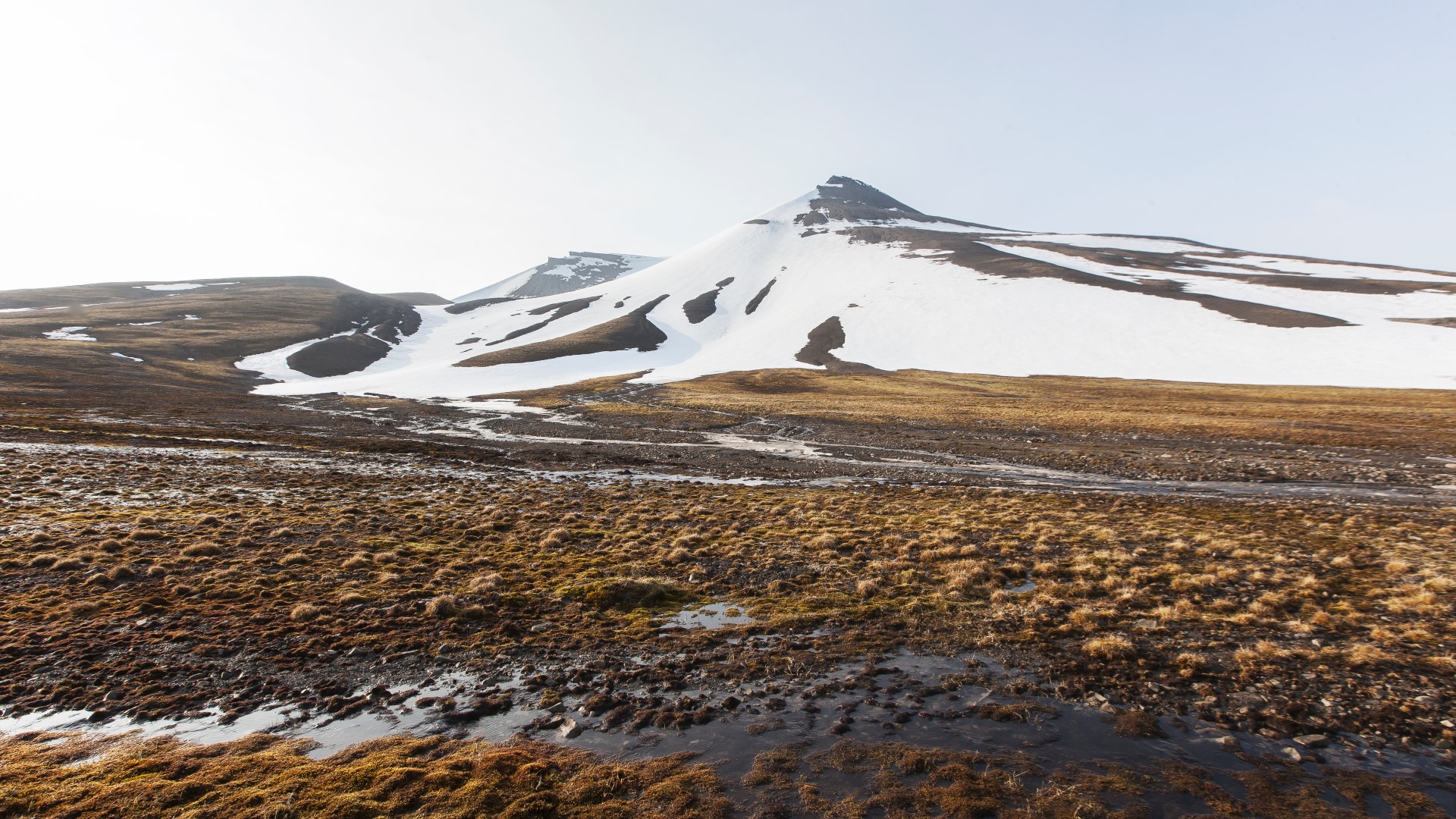 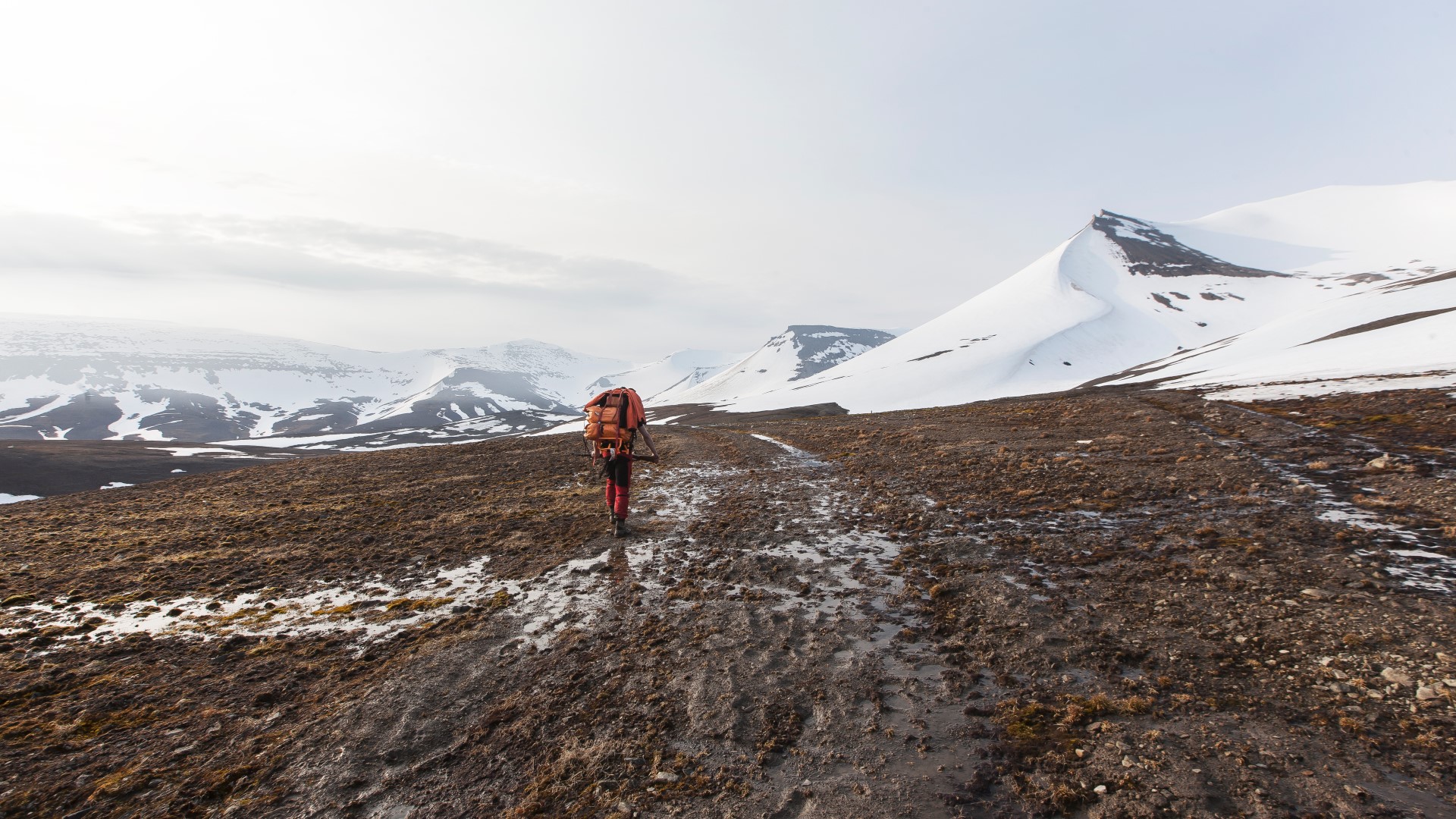 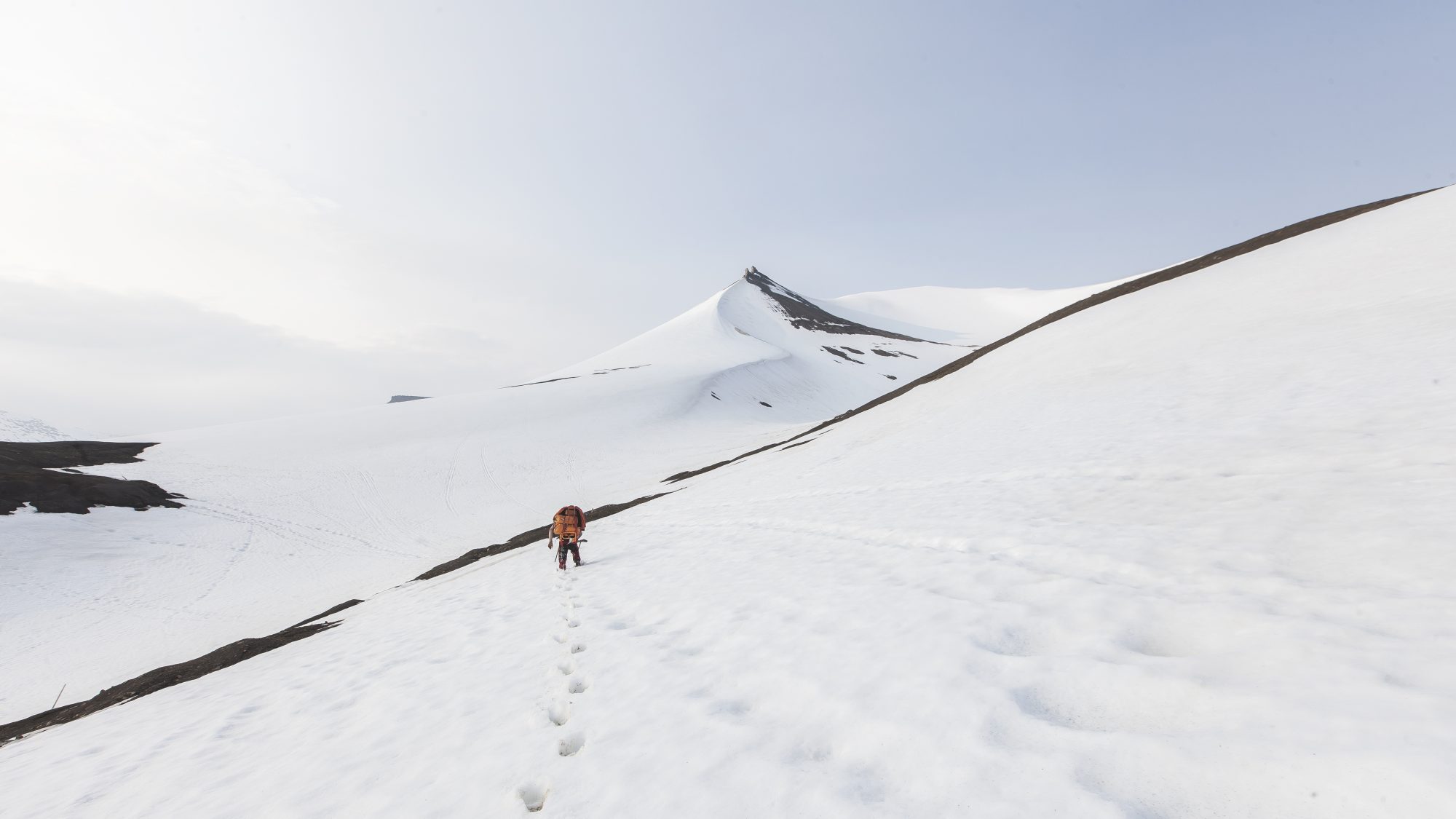 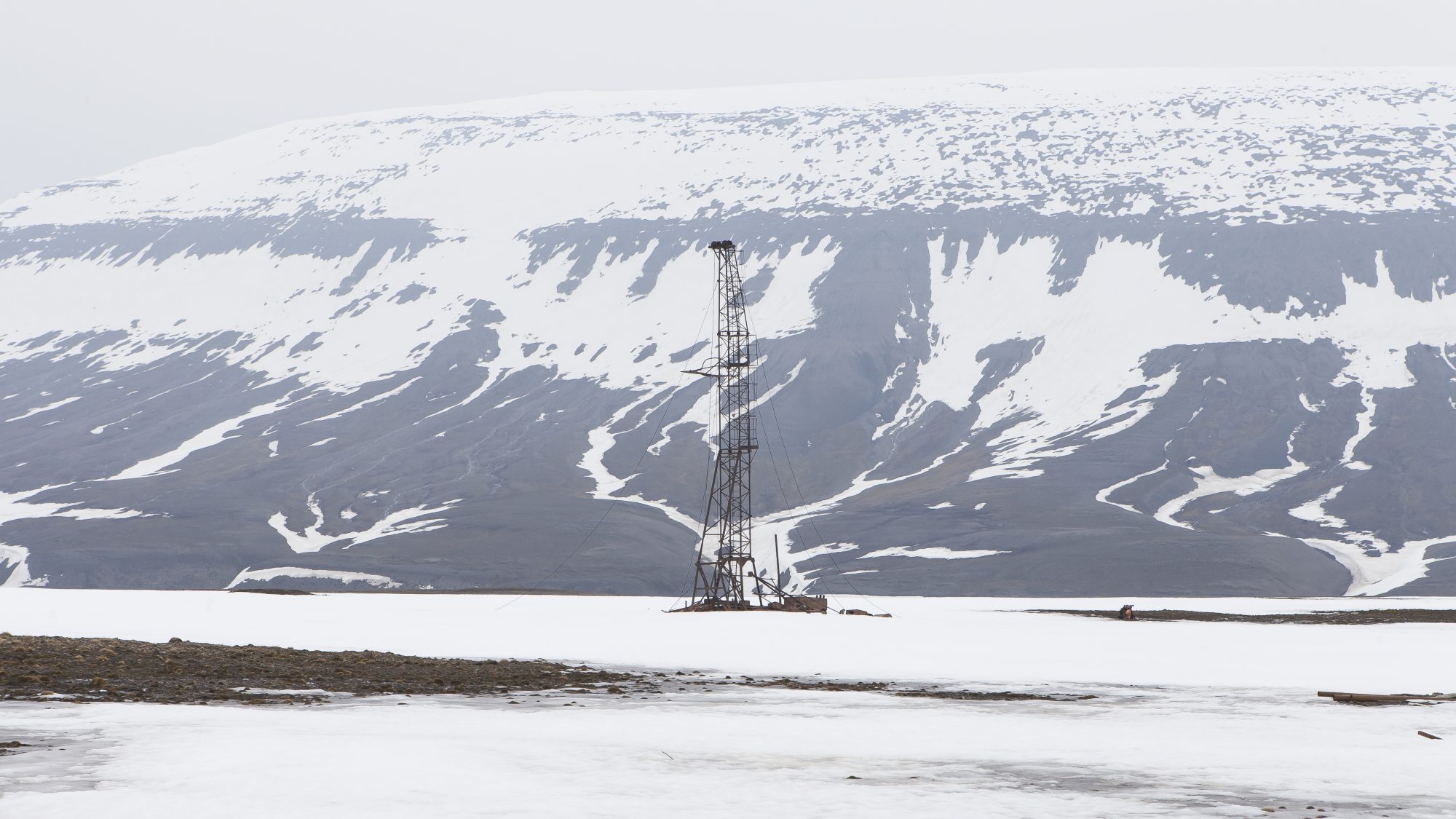 6 hours into our hike, we came across the first remains of the old soviet test drill sites. What we found was a wide spreaded debris field. Most of the drill rigs had collapsed over time and due to strong winds and rain, their parts were now scattered all over the place. Only one rig was still standing and already visible from a far distance. Another big surprise was an old worker’s cabin, still in a rather good shape. Inside we found tools, clothing and even some frozen food left behind. 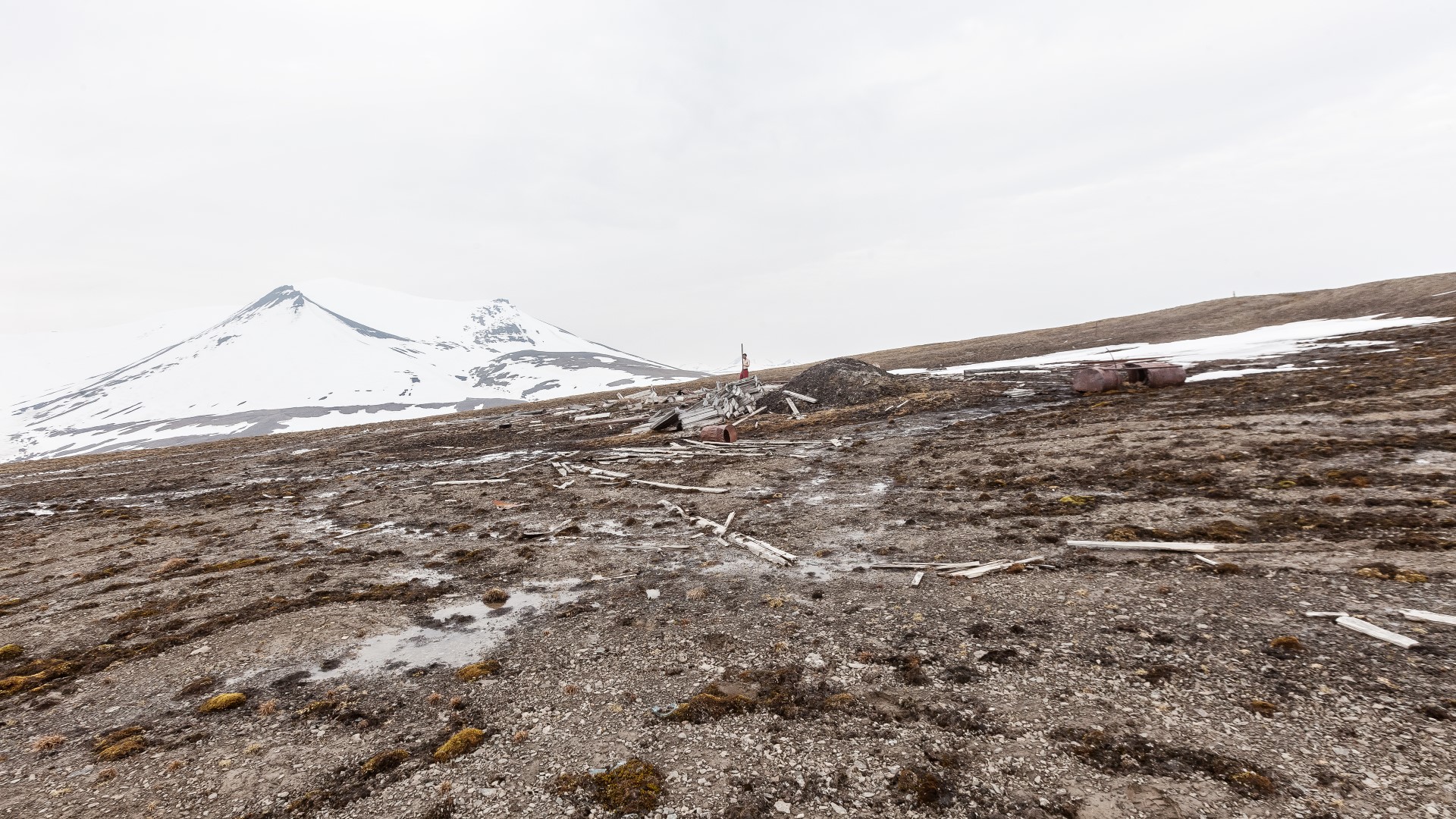 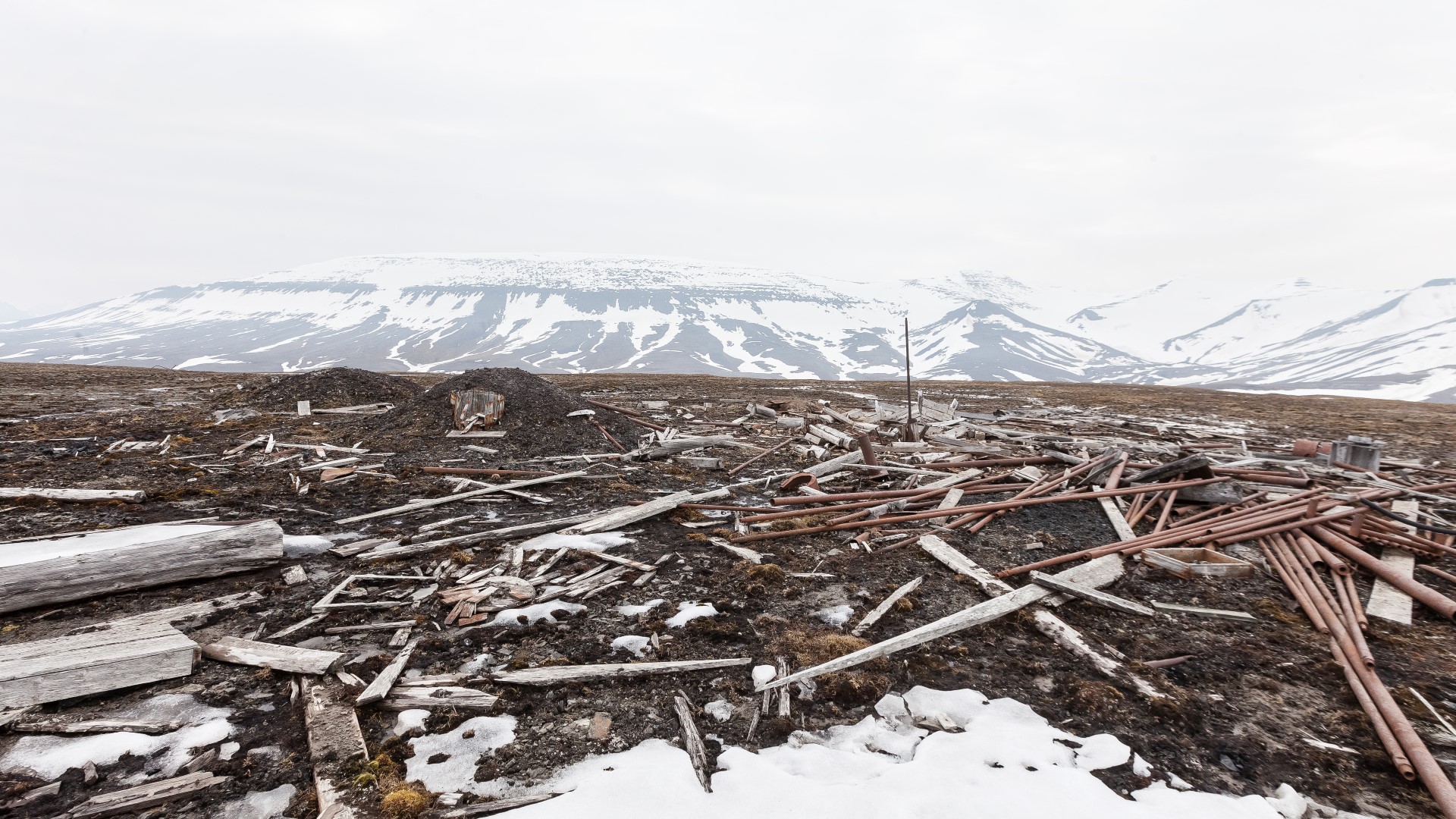 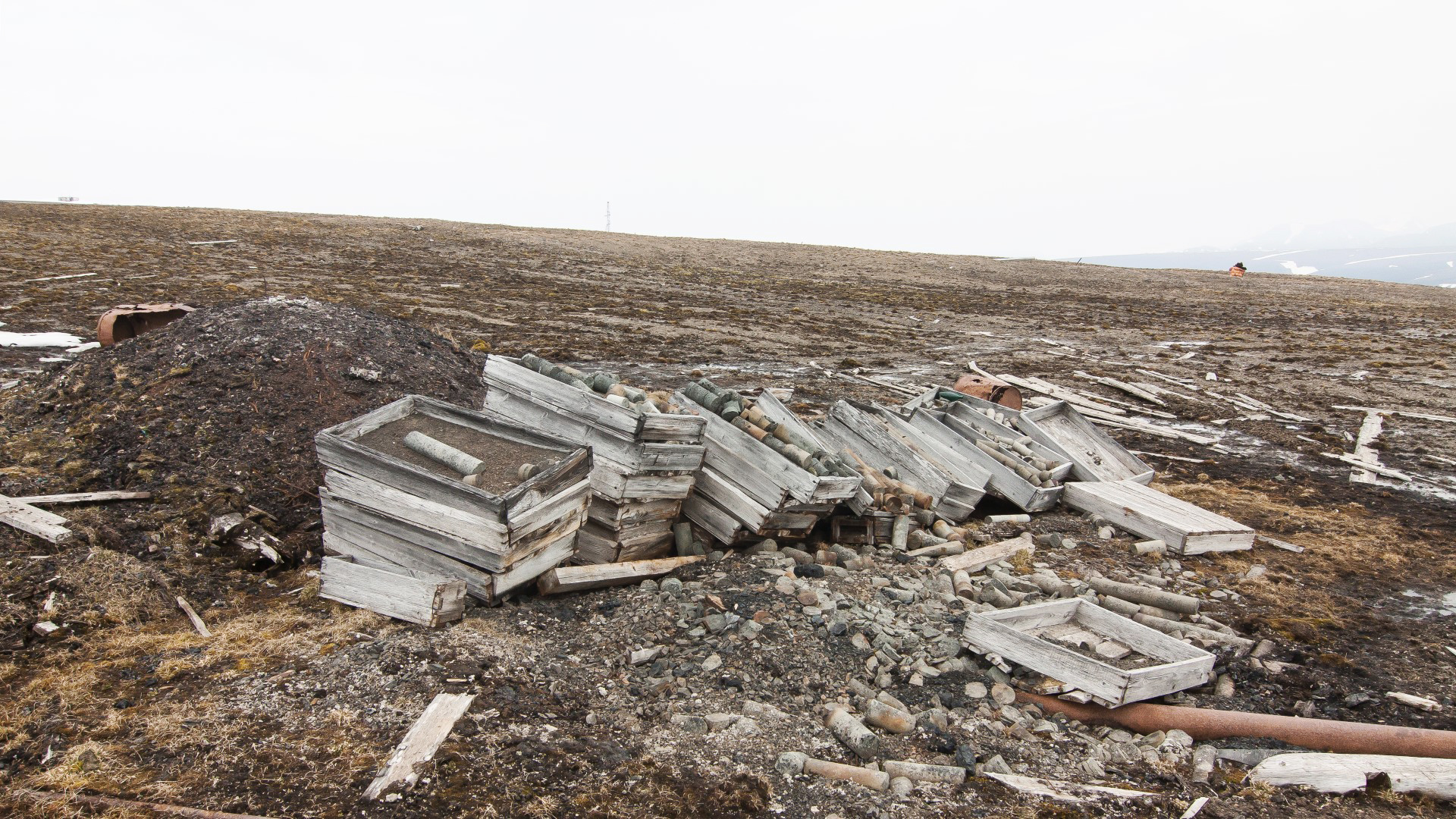 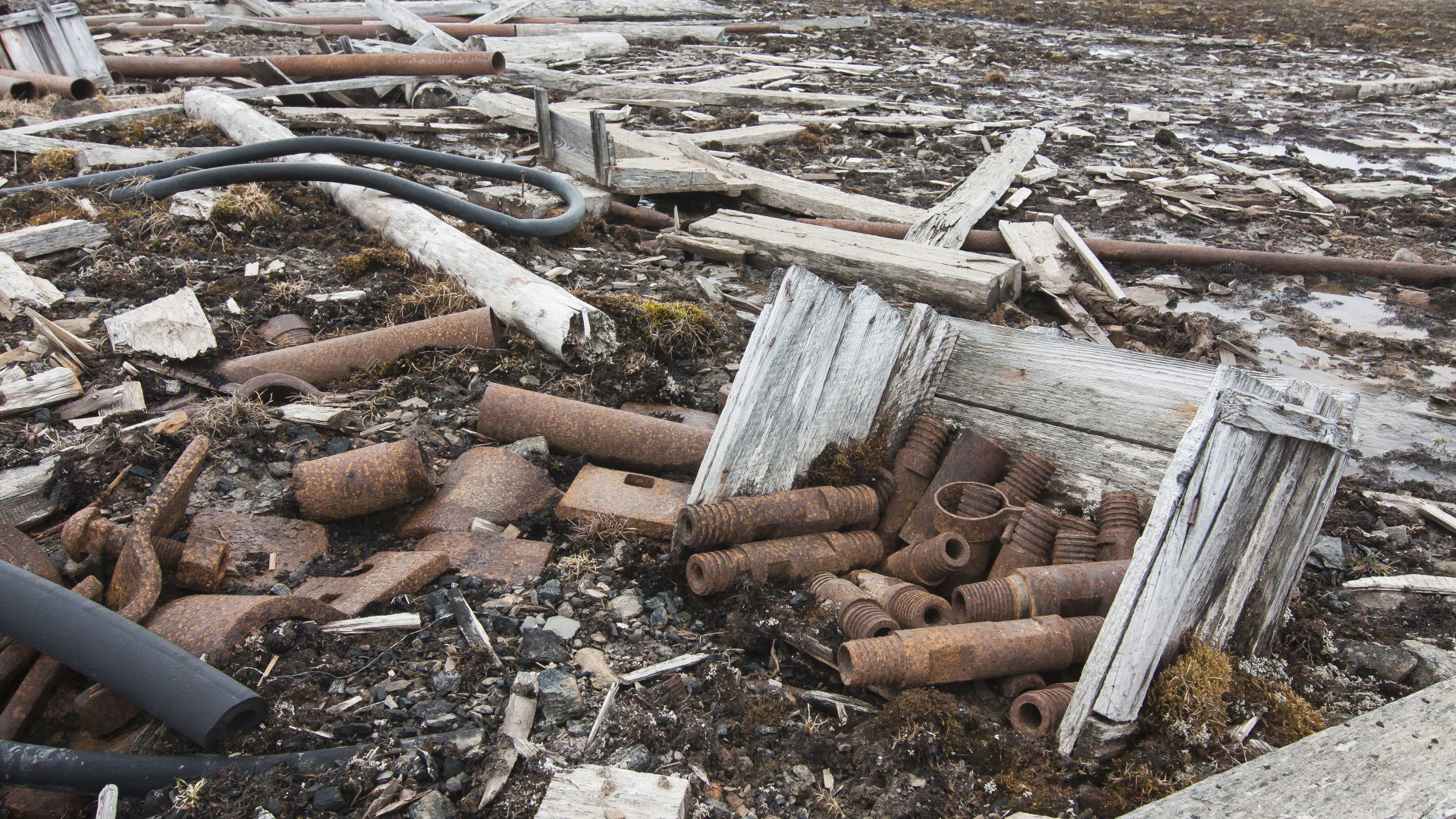 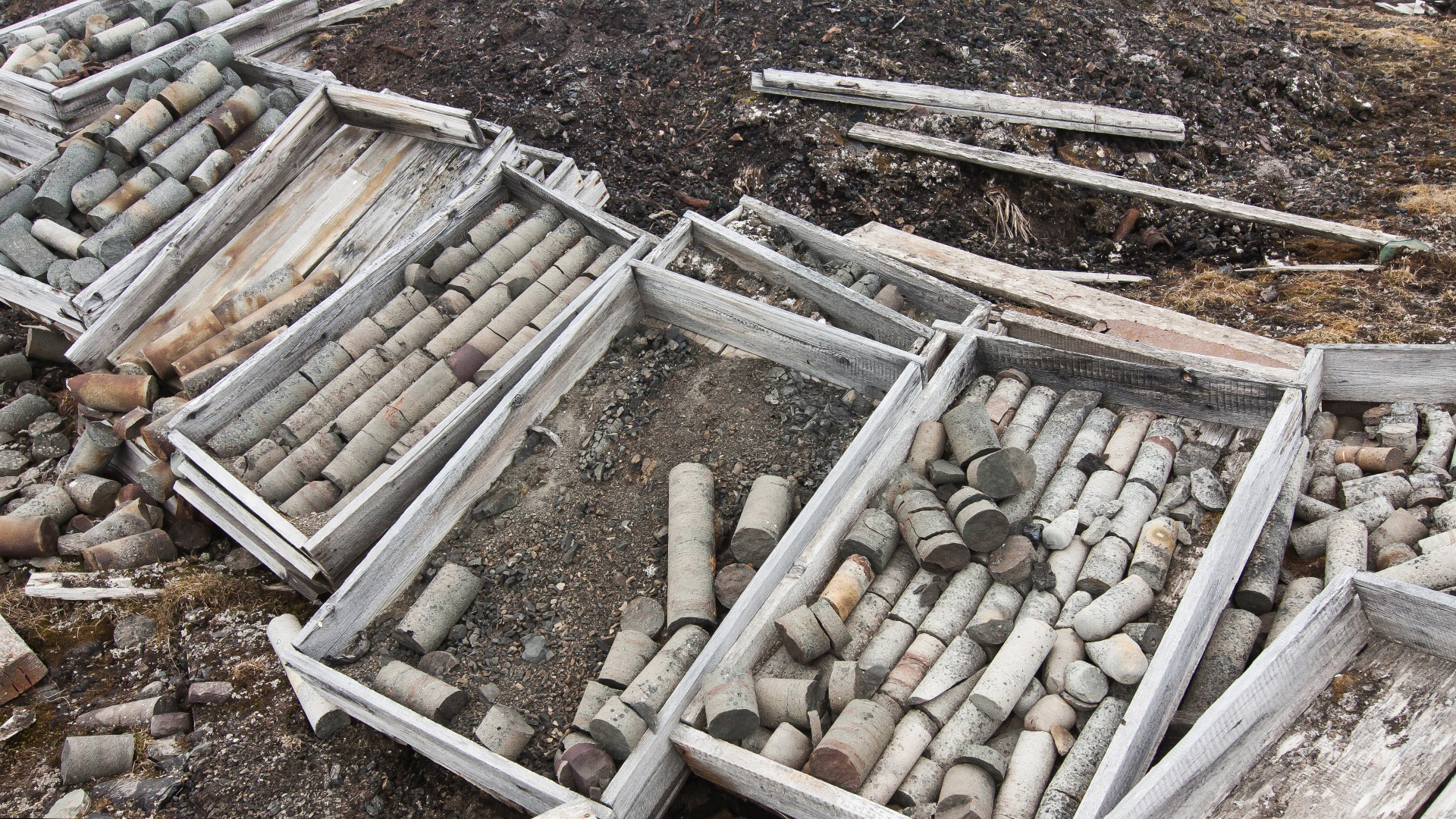 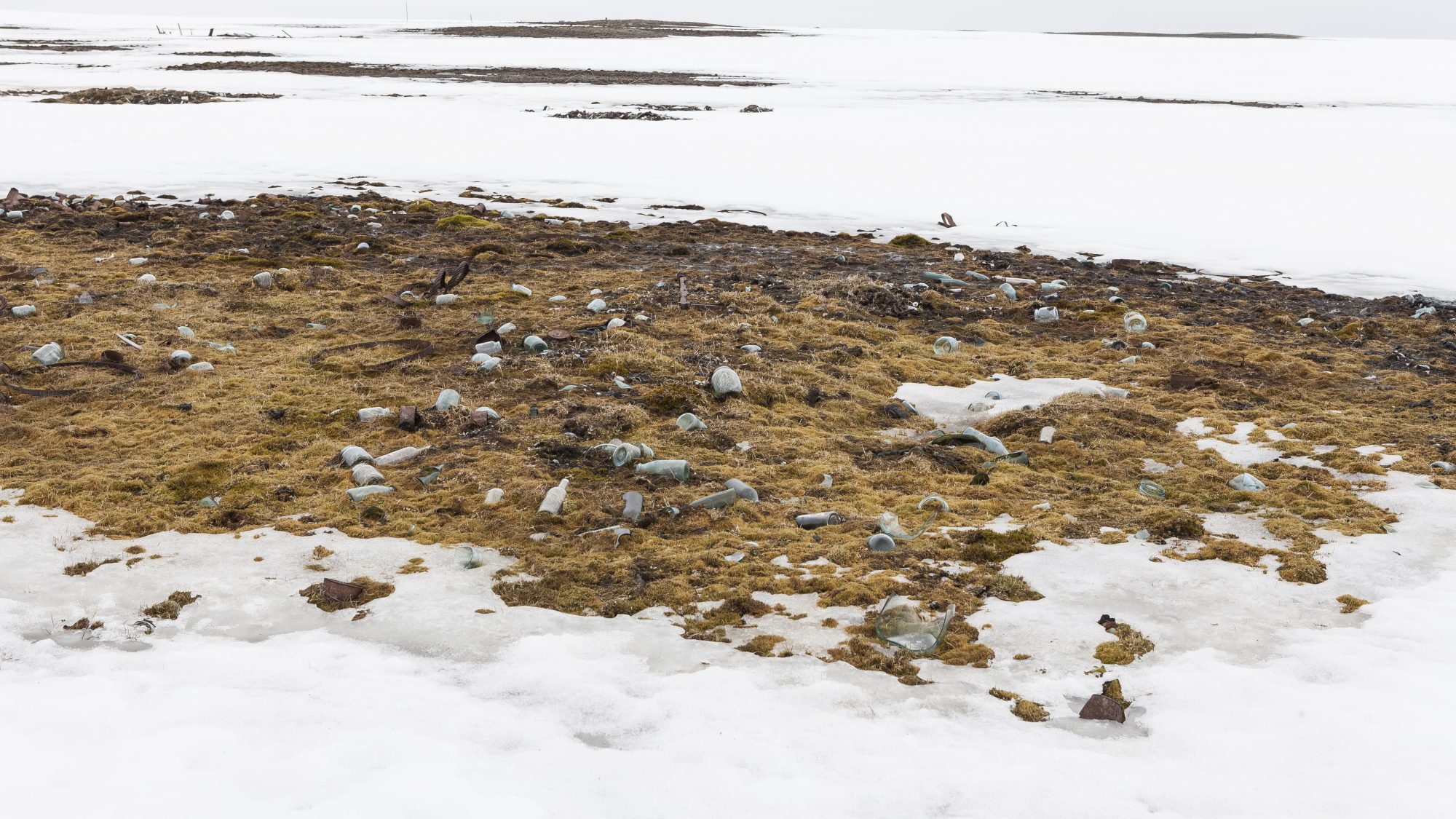 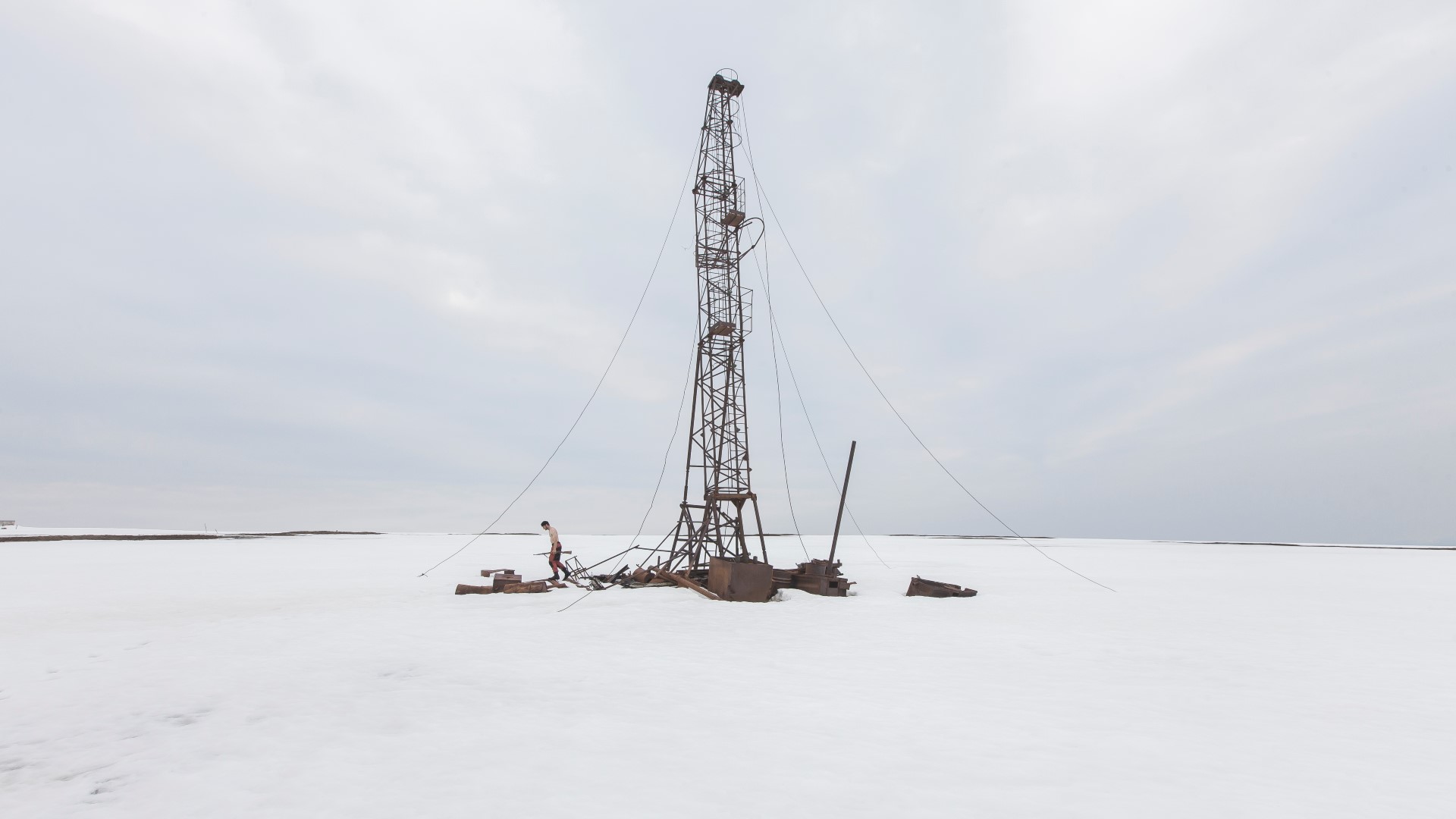 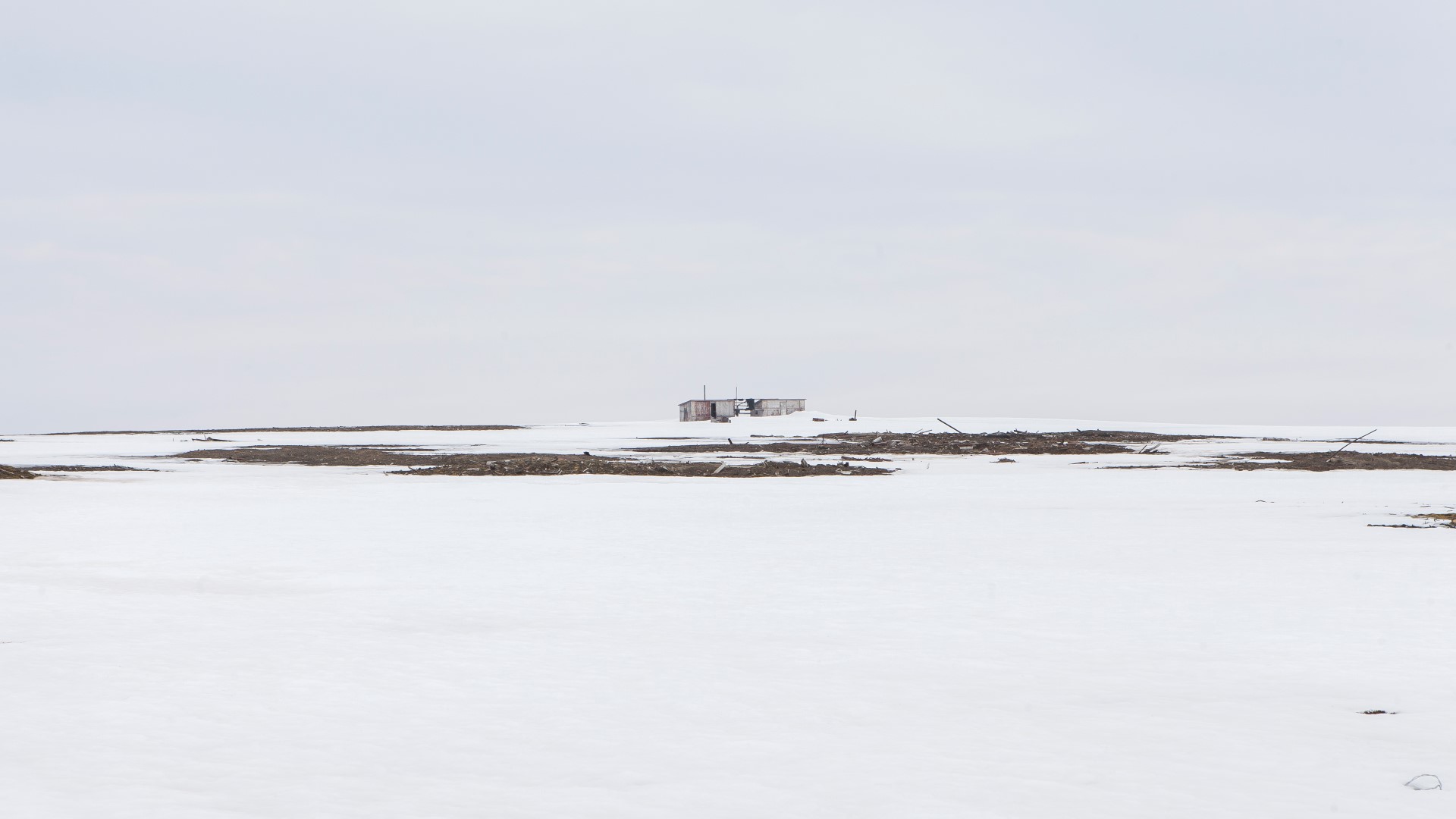 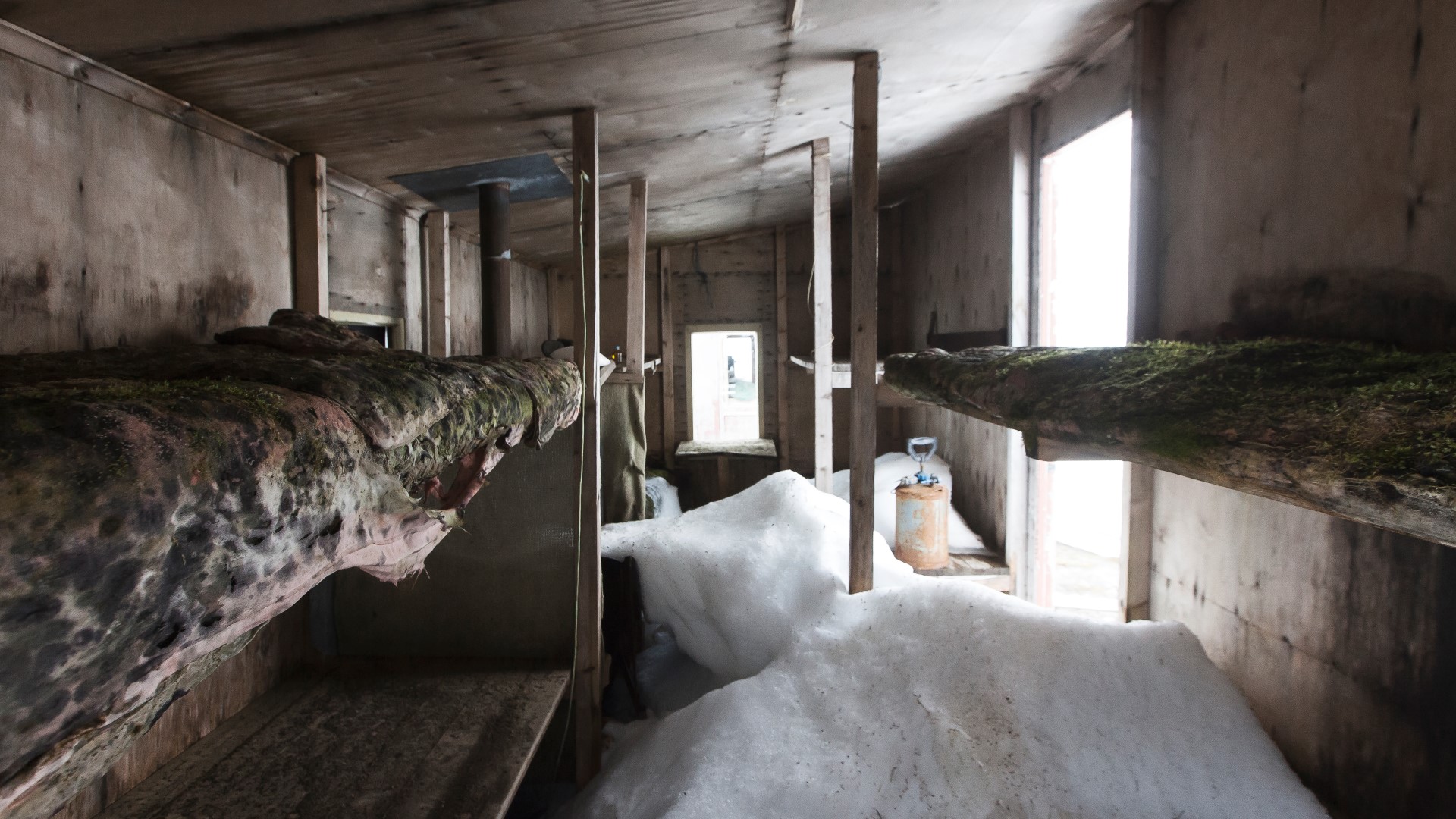 After exploring the rig site, we took a one hour break to eat something and discuss the final part of our route. We rested in front of a large riverbed that was filled with snow. This place had been recommended to us by one of the locals as one of the spots where it would be possible to get off the mountain plateau and down to Bjørndalen valley, which would finally lead us to the outskirts of Longyearbyen.

We decided to give this option a shot and set off. The descent was very steep so that we were basically sliding down the riverbed towards Bjørndalen valley. The only thing we had to be careful about here was not to slide down too fast. Shortly before reaching the valley down below, the snow slowly developed into a raging mountain stream and the wide riverbed became a narrow steep valley. Similarly, like in the ascent before, we were walking on a loose and unstable shitty gravel field again. But this time only for a few minutes. About 45 minutes after we had taken off, we reached Bjørndalen valley. The relief was huge for us and now, we had only one bigger challenge left to face. In order to get to our finish point 10 km from here in Longyearbyen, we would now have to cross Bjørndalen river.

Although the water was only about 50 cm deep, the current of the river was very powerful. Standing next to the water, you could hear rocks moving and crushing down the stream. So as we went through the water, we had to put a lot of effort in not losing our grip. From here on the rest of the way was rather easy. There were a few smaller rivers we had to cross too, but nothing similar to what we had already left behind. About three and a half hours later and over 12 hours after we had set off at Rusanovodden Cabin, we finally arrived at Longyearbyen camp site. At this point, we had been on our feet for over 20 hours and were totally exhausted. We set up our tent and slept for almost 24 hours straight.

As we woke up the next morning, everything outside was covered in thick fog. You could only see a couple of metres far and the fog stayed for three days. Our flight back to Norway as well as all the others the next days were cancelled. Luckily for us while we were waiting for better weather and for the airport to start operating again, we were accommodated in the Radisson Blu Hotel in Longyearbyen by our airline. Real food, sleeping in a proper bed and having a shower had only been things we had been dreaming of for a while at this stage of the trip.  It was a perfect ending to what had developed to an awesome journey over the last two months. We were so happy that, despite our concerns and doubts in the beginning, we actually went on this trip and that we had made it through to the end.

Thanks to Spitsbergen Travel, the Sysselmannen, Marcel Schütz and all the other people who helped us during this trip. 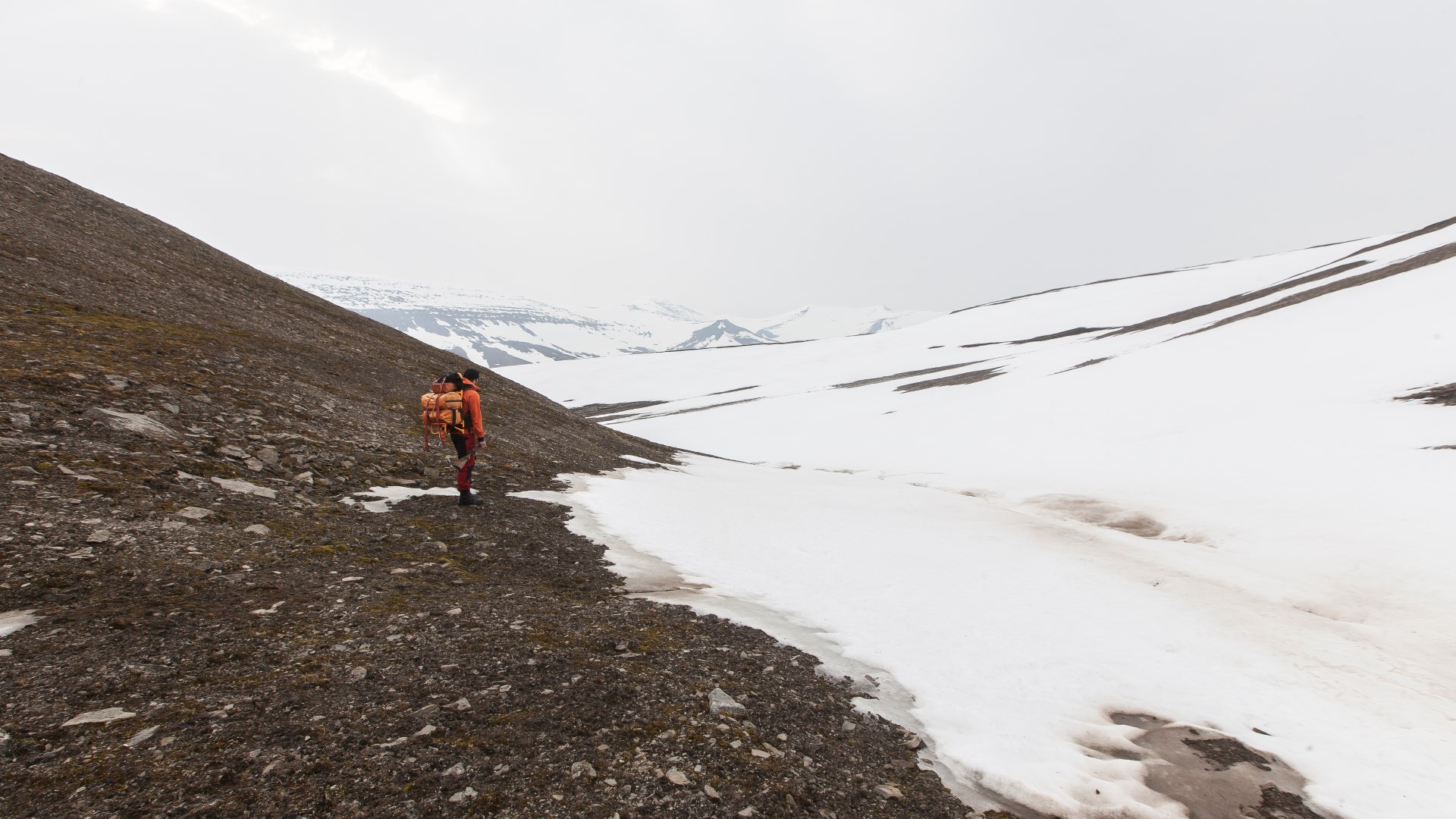 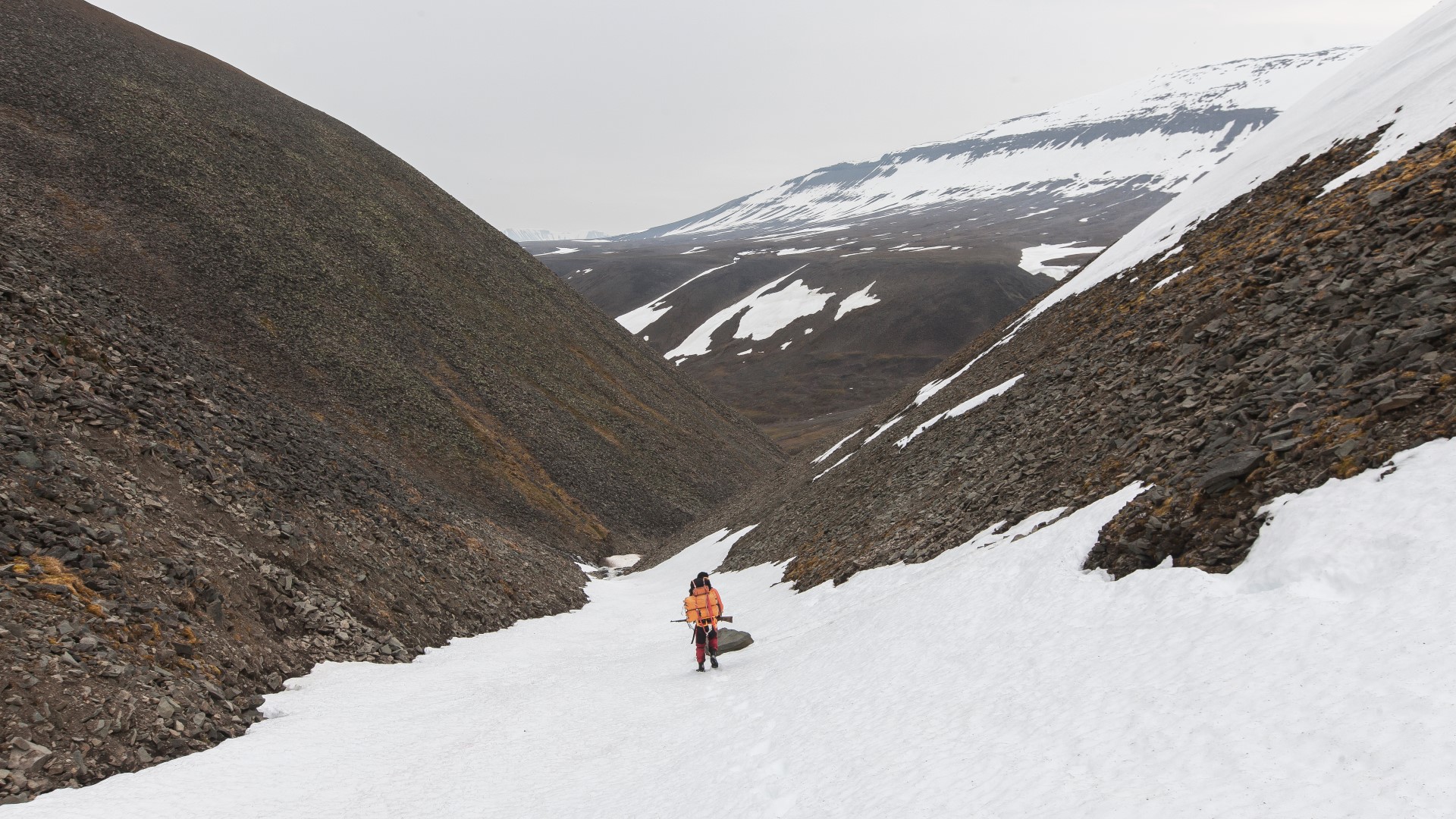 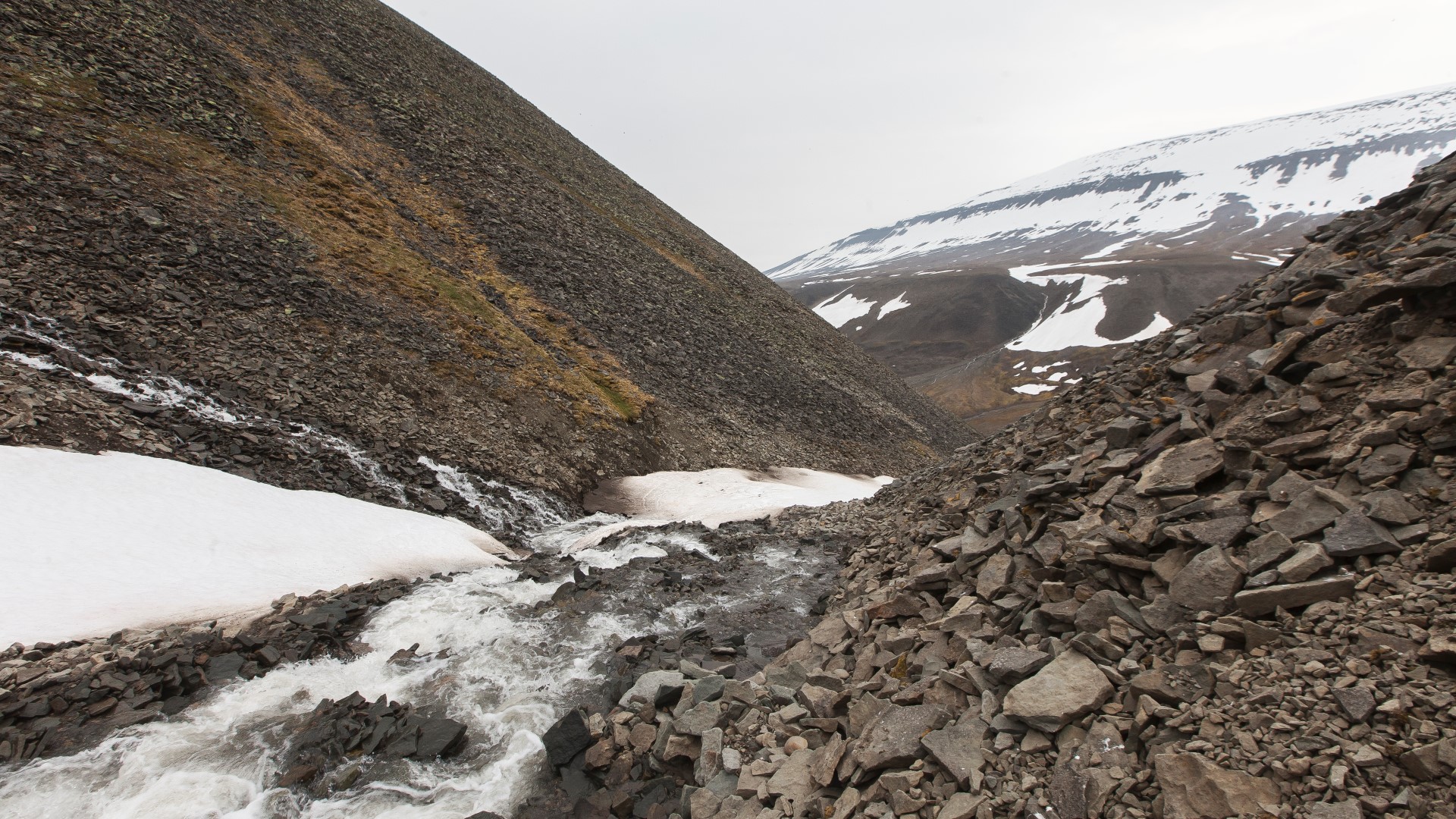 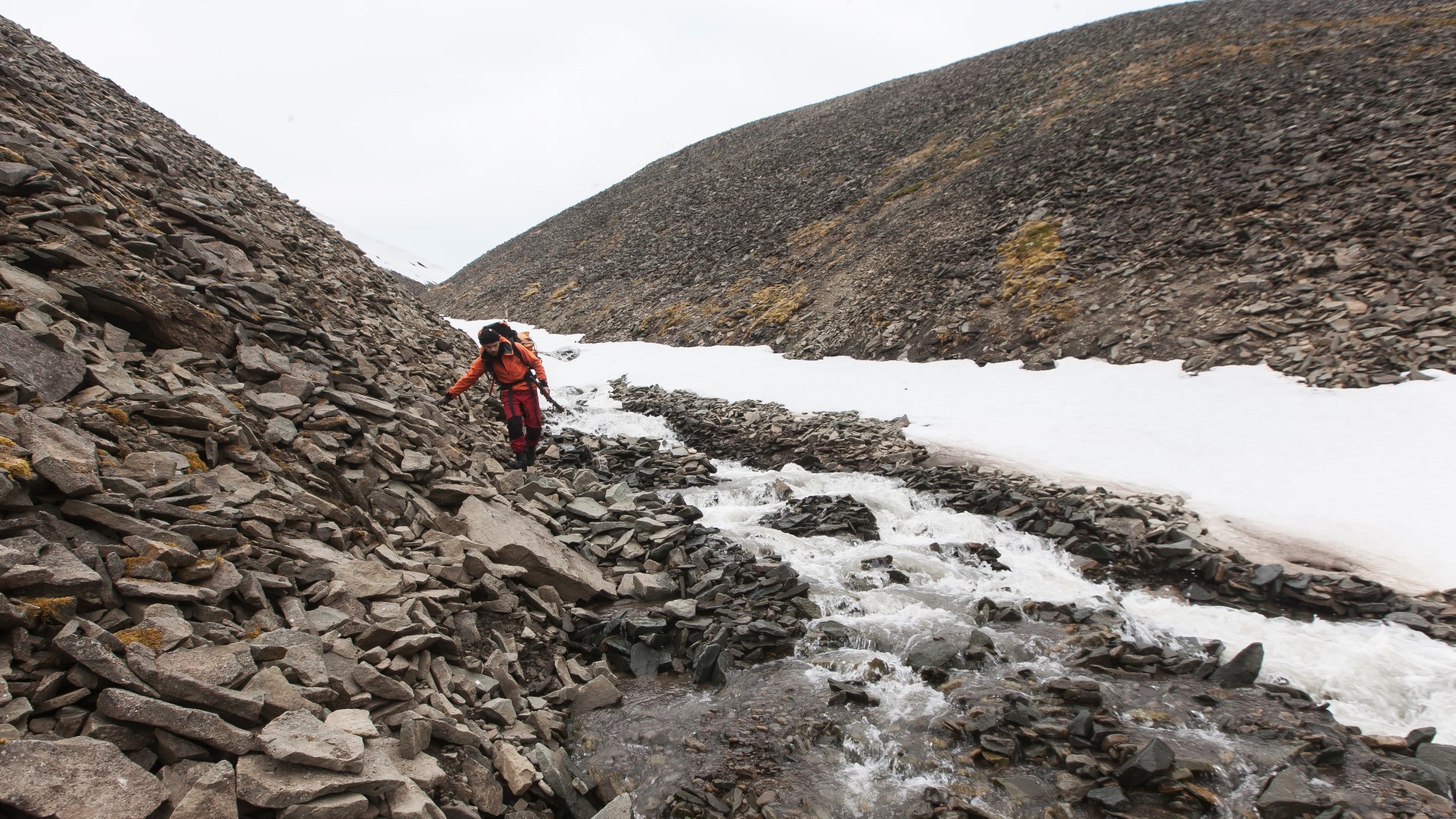 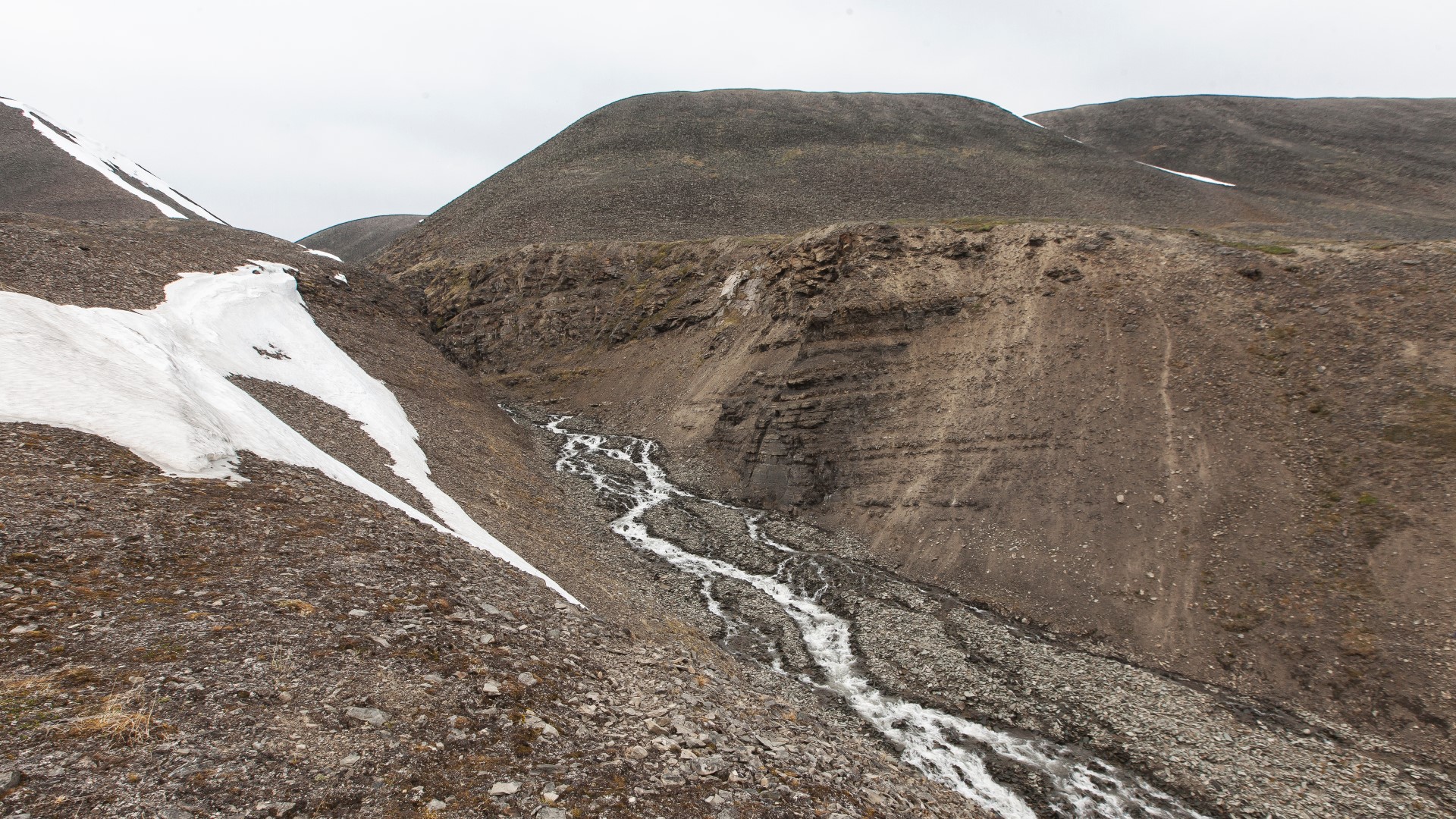 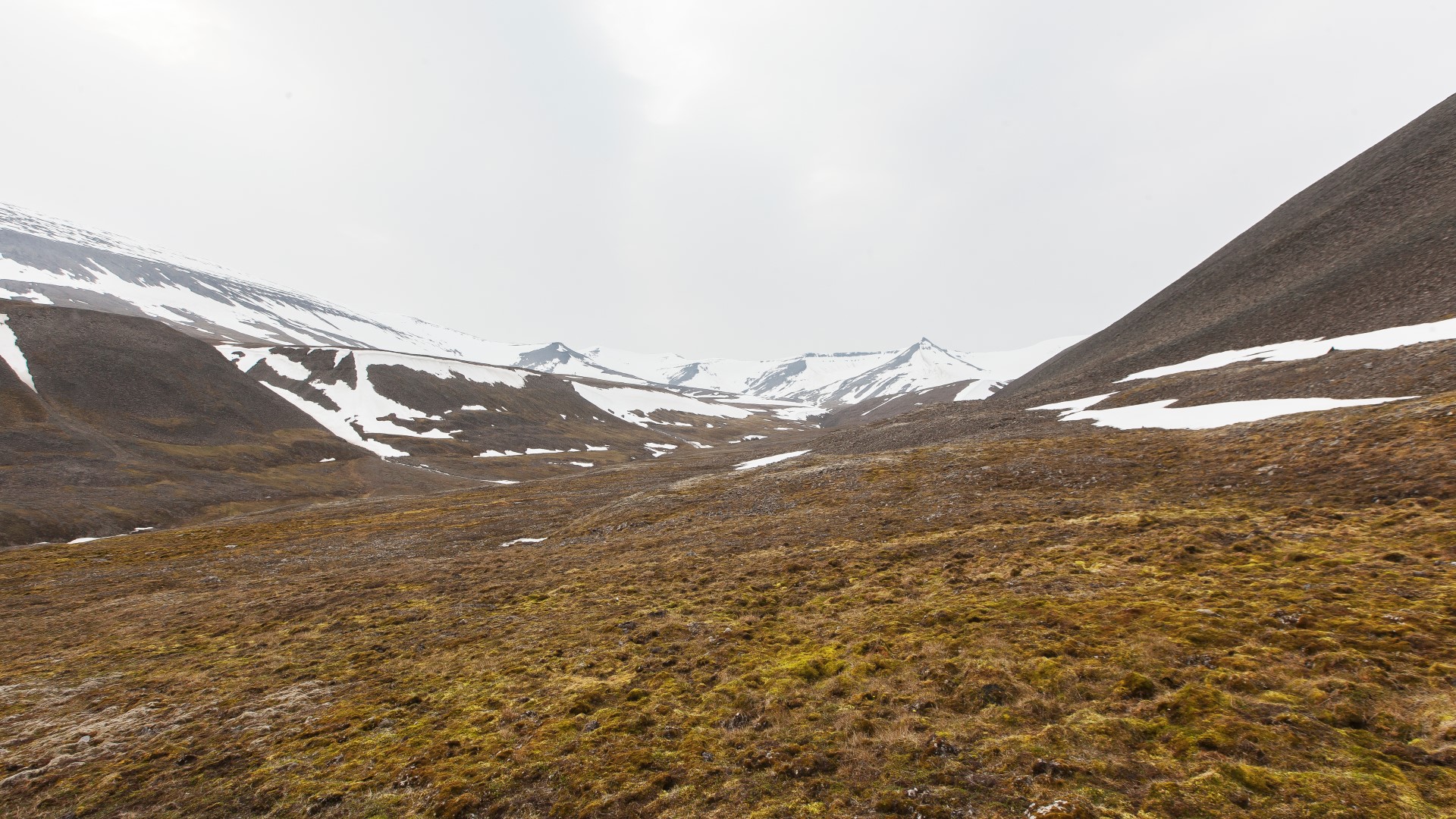 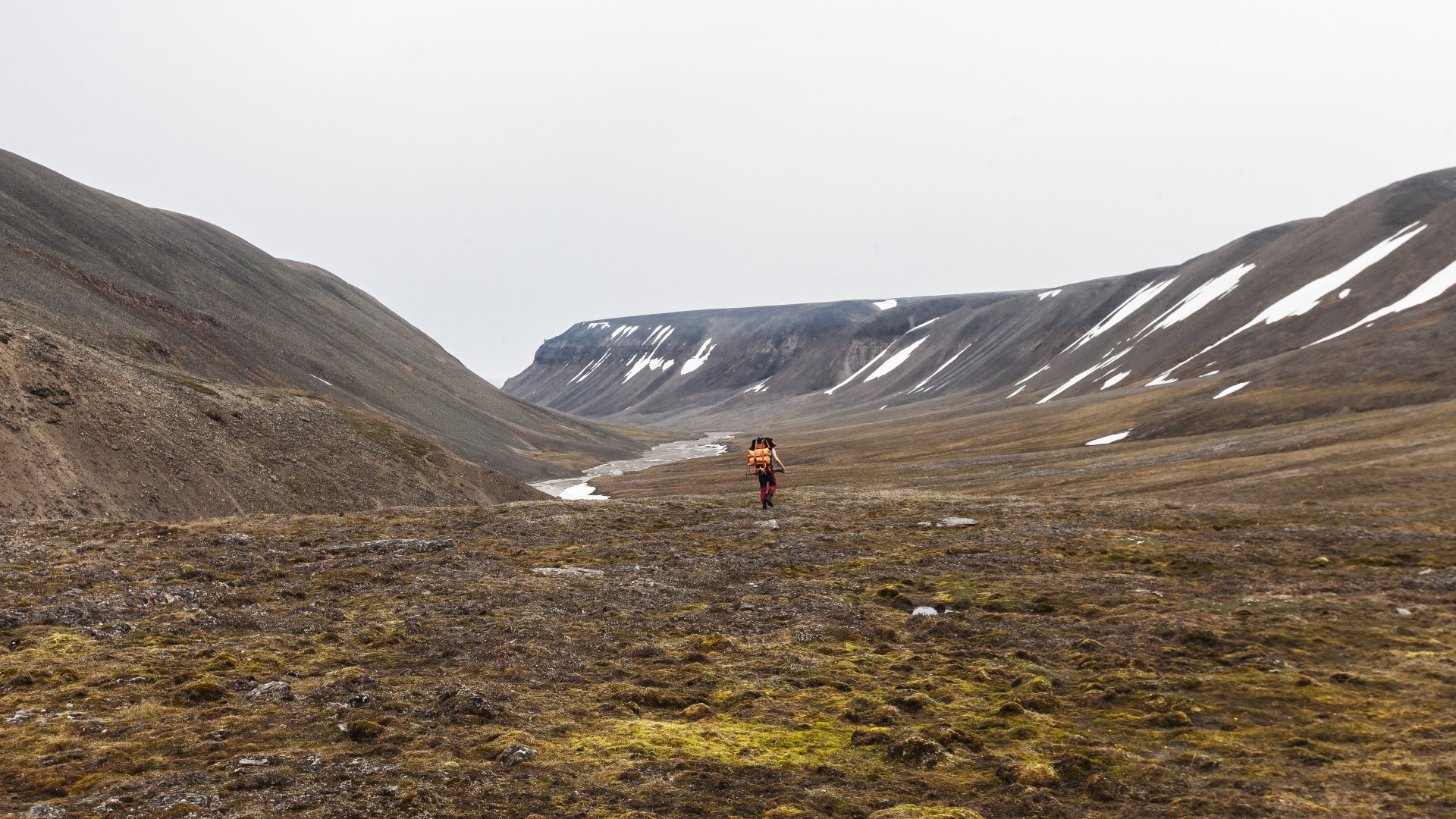 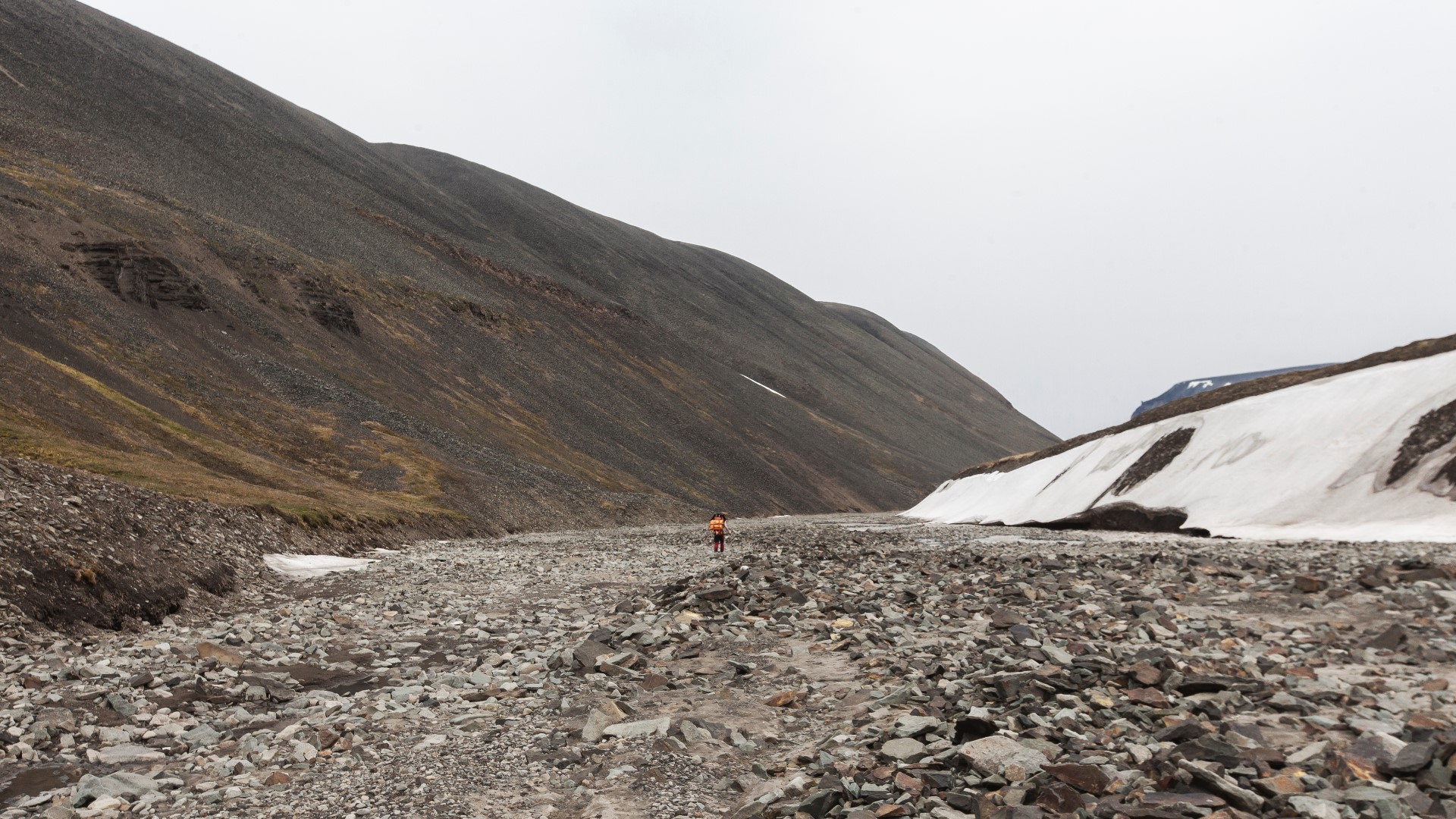 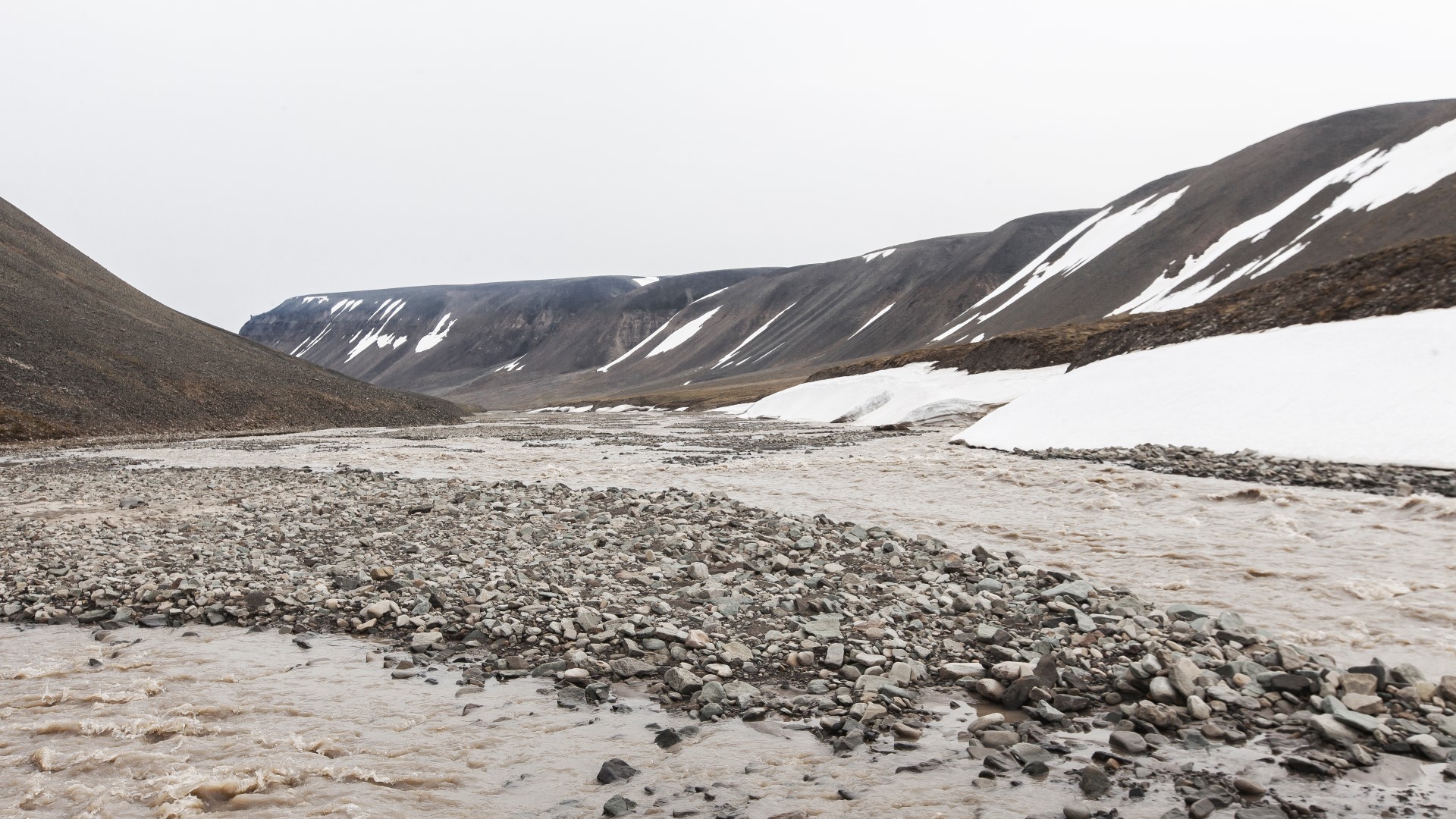 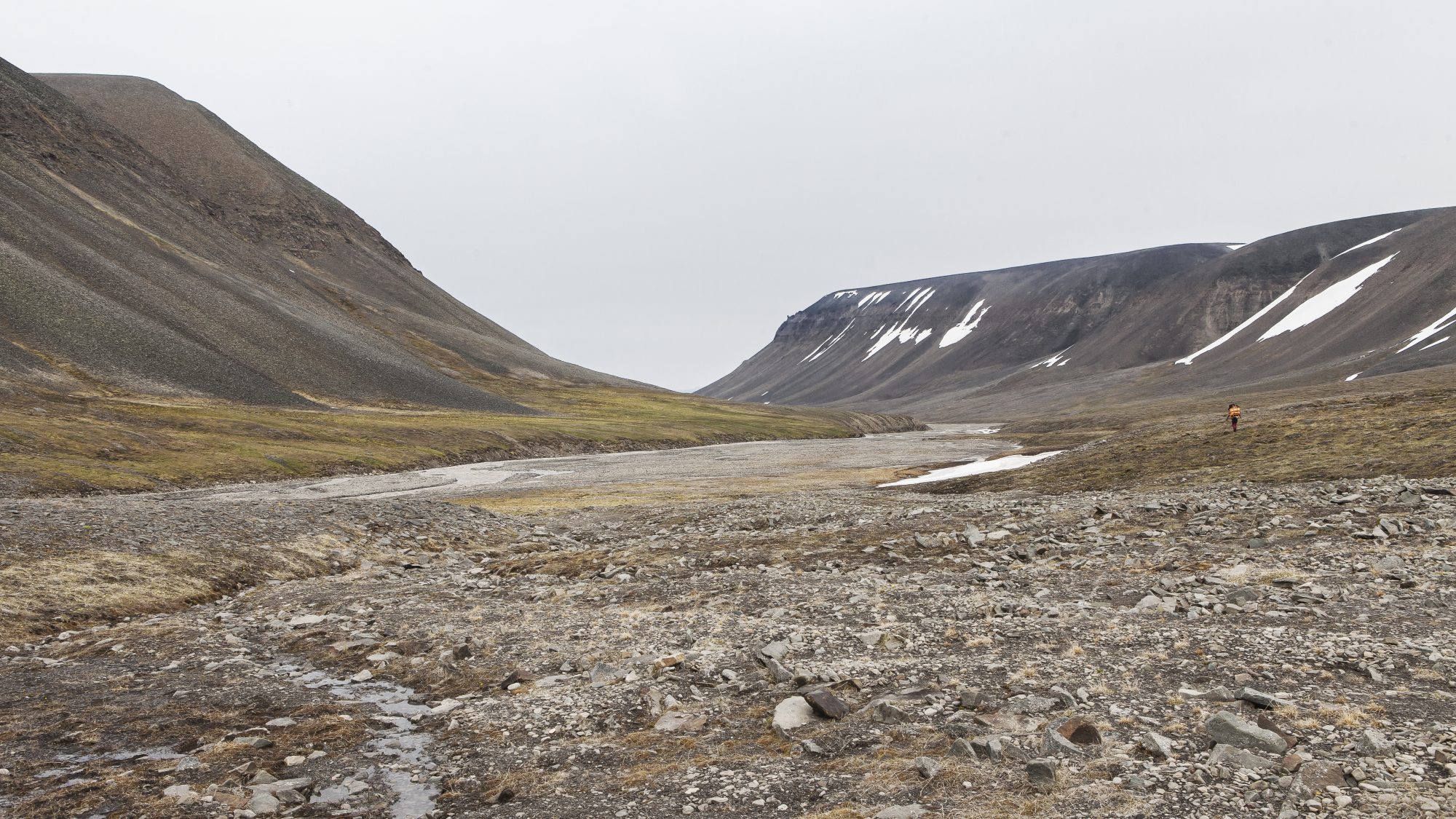 From Barentsburg to Longyearbyen 1/3

Out of the countless mines and mining-settlements on Svalbard there are only two active ones left. One is the Russian town of Barentsburg and the other one in the Norwegian … Svalbard – Colesbutka | Expedition | July 2015

From Barentsburg to Longyearbyen 2/3

After being stuck with two slightly shitty options to get out of Grumantbyen and to the Rusanovodden Cabin, we chose the one that seemed to be the least shitty one … Germany – Leipzig | Urban Stroll | April 2015

From the year 1875 on a huge Barracks district was built in the north of Leipzig. Between the city district’s Gohlis and Möckern over the following years several new barracks …
We use cookies on this website to make your experience better. By continuing to browse you agree to our use of cookies. If you do not consent to the use of cookies, please alter your settings.OKPrivacy Policy